It’s strange that I’ve never shared such a pivotal period in my life here, given that I’m a classic over-sharer.

How apt that I then share a little about the year I spent in the French Alps – while we’re all stuck at home, dreaming of the adventures we’ve had, and want to have. It was 2008, I was 21 – freshly graduated from UCT, and also very freshly heart-broken. With a degree and ex-fiancé behind my name I wanted to get as far away from Cape Town as I possibly could to clear my head. The UK held little appeal – particularly given the number of South Africans I was likely to run into – so, when the option of au pairing in the French Alps popped into my inbox, I was sold. 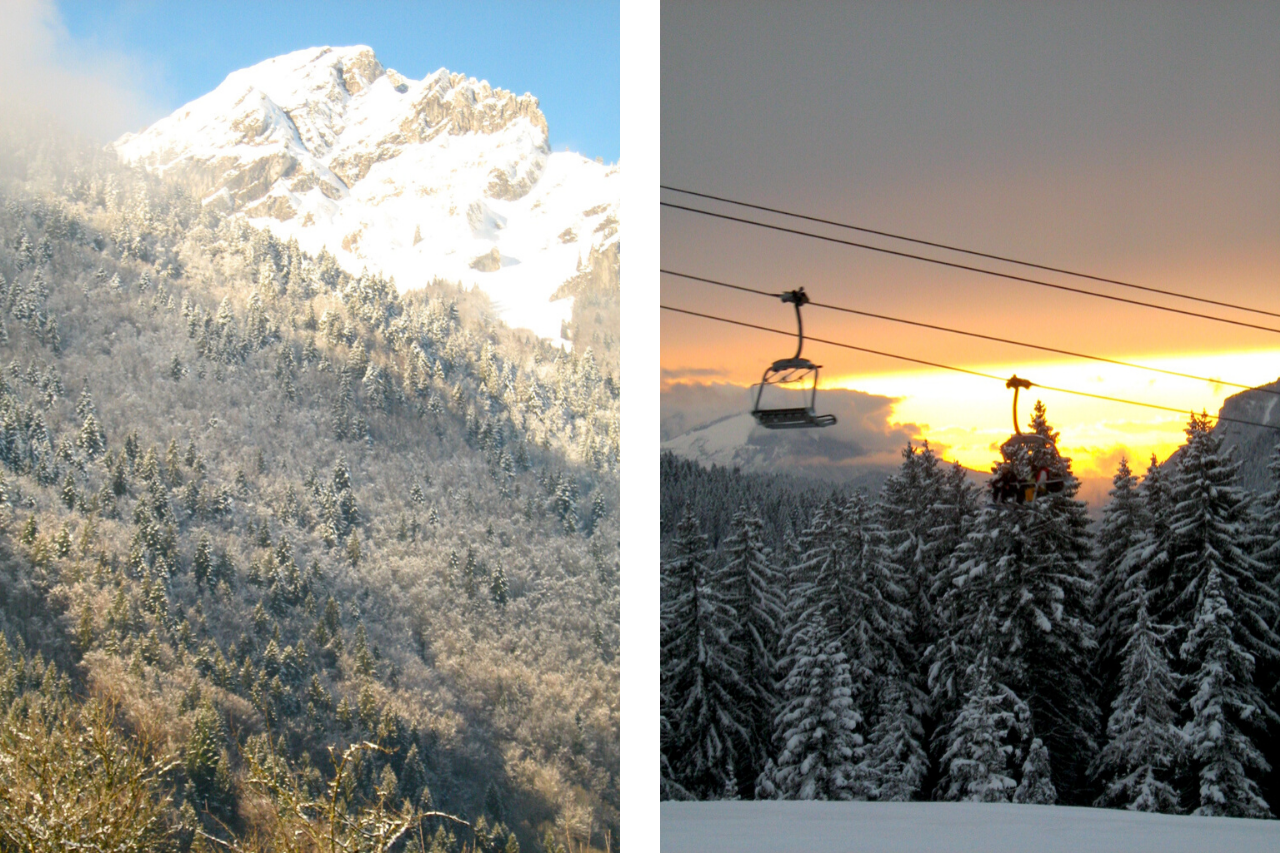 A mountain of paperwork down, I headed to the region of Haute-Savoie, the highest region in Europe and home to Mont Blanc. I was looking for adventure and escapism – and, I found both. But, I also quickly discovered that au pairing two spoilt British girls was not something I could do for longer than 6 weeks, and managed to find another position as a chalet host for the remainder of my time in France.

I arrived in January, in the middle of the night, fresh off my flight and into bed. The next morning will stay with me for the rest of my life – waking up, opening the curtains and seeing the fresh, white world in front of me (the photograph below right) – this Cape Town girl who had never seen snow before officially lost her mind. I remember putting a coat and boots over my pyjamas, running outside and just staring in wonder. Three things will stick with me: How crunchy snow is underfoot, how it absorbs so much sound – and, how I expected minus 12 degrees C to feel colder. 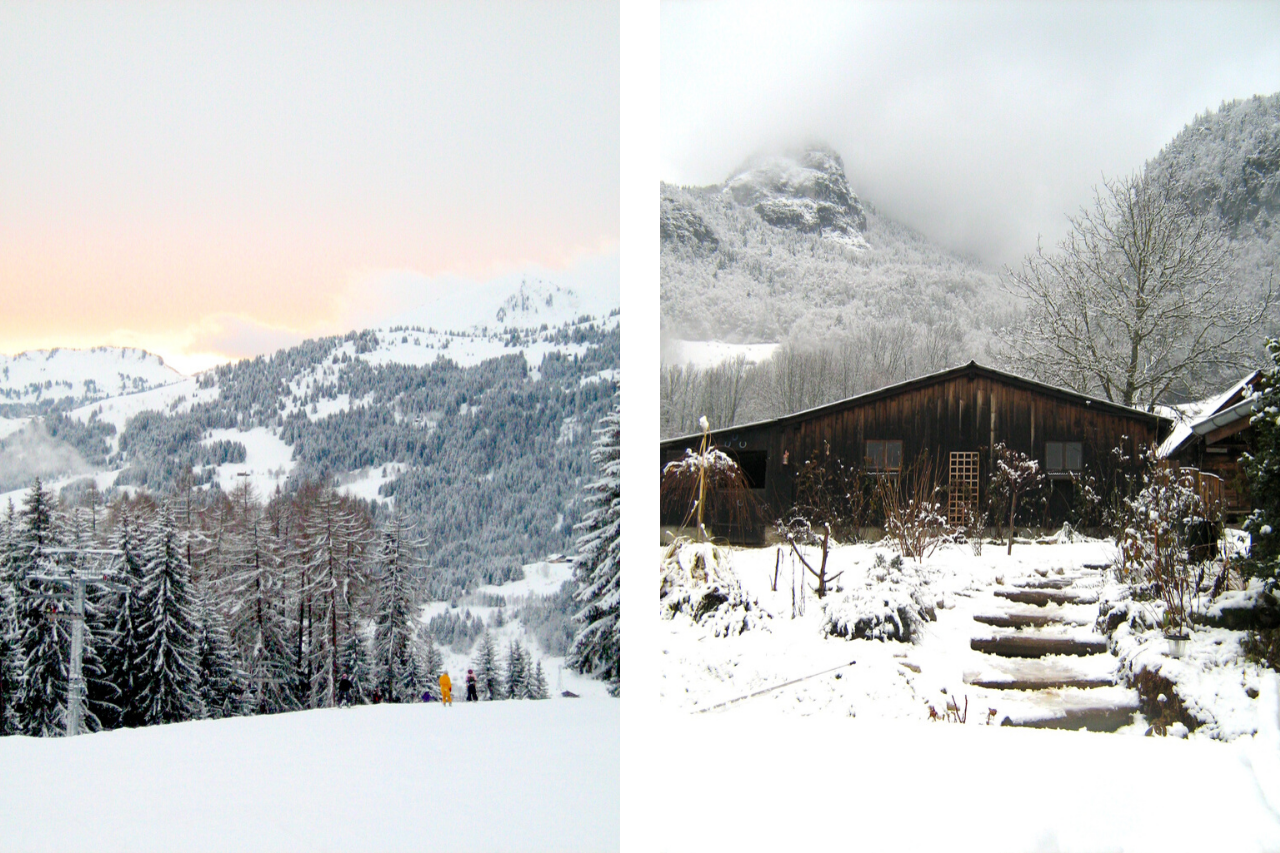 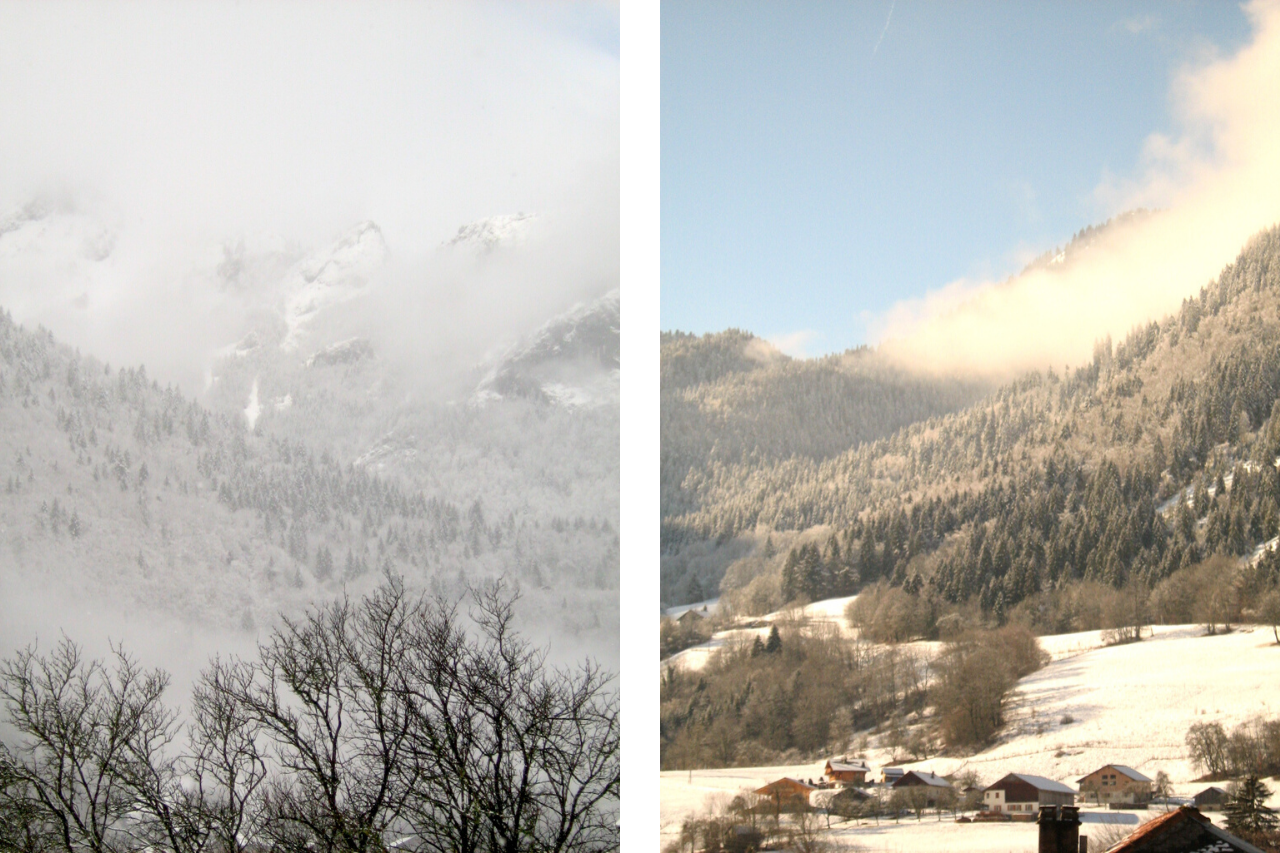 For the first half of my time there, I lived in a little village, which according to its last census results, has a population of 589 people. It wasn’t a resort or commercial, just a small residential cluster about 15 minutes away from the main ski town in the area, Morzine.

My first weekend, I met the neighbours – a lovely French couple in their fifties – their son, and his friends. And, just like that I found myself with a French boyfriend called François, who spoke no English, and continued to be my boyfriend until the day I left to come back home to Cape Town. I mean, when your first date involves watching the sun set across Lake Geneva, what’s a girl to do?

And, boyfriend aside, this extended group became my adopted family for the entire time I was in France, and gave me a glimpse into local life that I could never have dreamed of. Friday night cheese fondues around the table, with the parents, son, little sister – friends and girlfriends. A group of misfits, where everyone is welcome. After that, we’d go to another friend’s homemade bar, drink terrible aniseed-flavoured liquor and have an at-home karaoke party with someone else’s dad or uncle joining in. Or go to a “club”, where I’d learn that no woman is strong enough to take on the challenge of heels on ice. To dance to Hotel California, to have four French guys in their twenties belt out “Take My Breath Away” in the car on the way home at 2 am, while one falls asleep on my shoulder (incidentally, not my boyfriend). 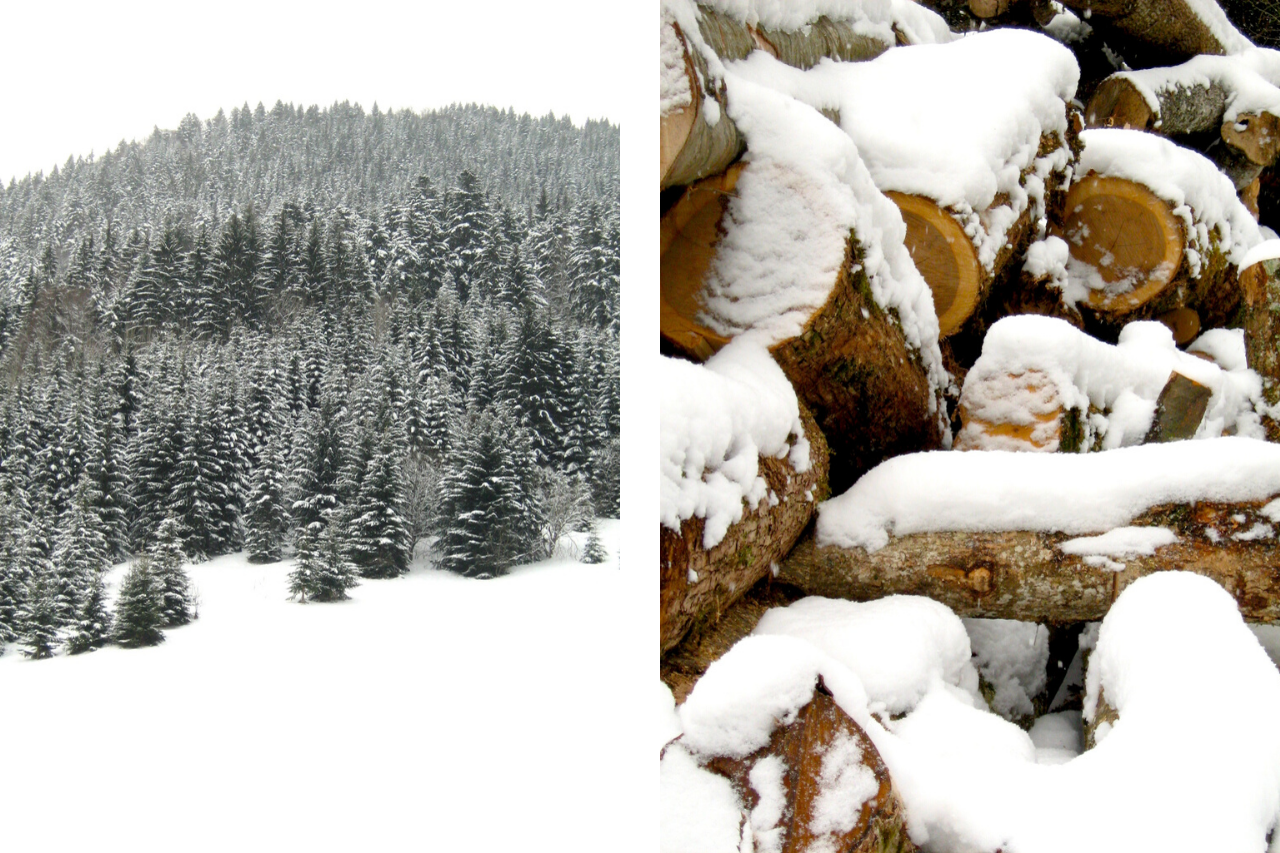 In summer, life changed. It was hot – we’re talking an easy 34 degrees Celcius. The skiers were swapped for mountain bikers, the broken shins for broken collarbones. There were blossoms and blooms, riots of colour and green everywhere you looked. And, while I spent most of summer living in the ski town of Morzine itself, I’d go back to the village fairly often – where foals were being born, hay rolled – Luke often teases me, as I quite literally made hay while the sun shone.

I’d work mornings and evenings – helping with breakfast and dinner, tidying up around the chalet, spending time with guests, and have most of the day free. I’d walk, explore, spend time at the pool – the lady at the ticket booth was a friend from the village, so she’d never charge me to enter – understandably, I had a great tan and drank what I’d imagine being a large portion of all the chilled French rosé produced that year. 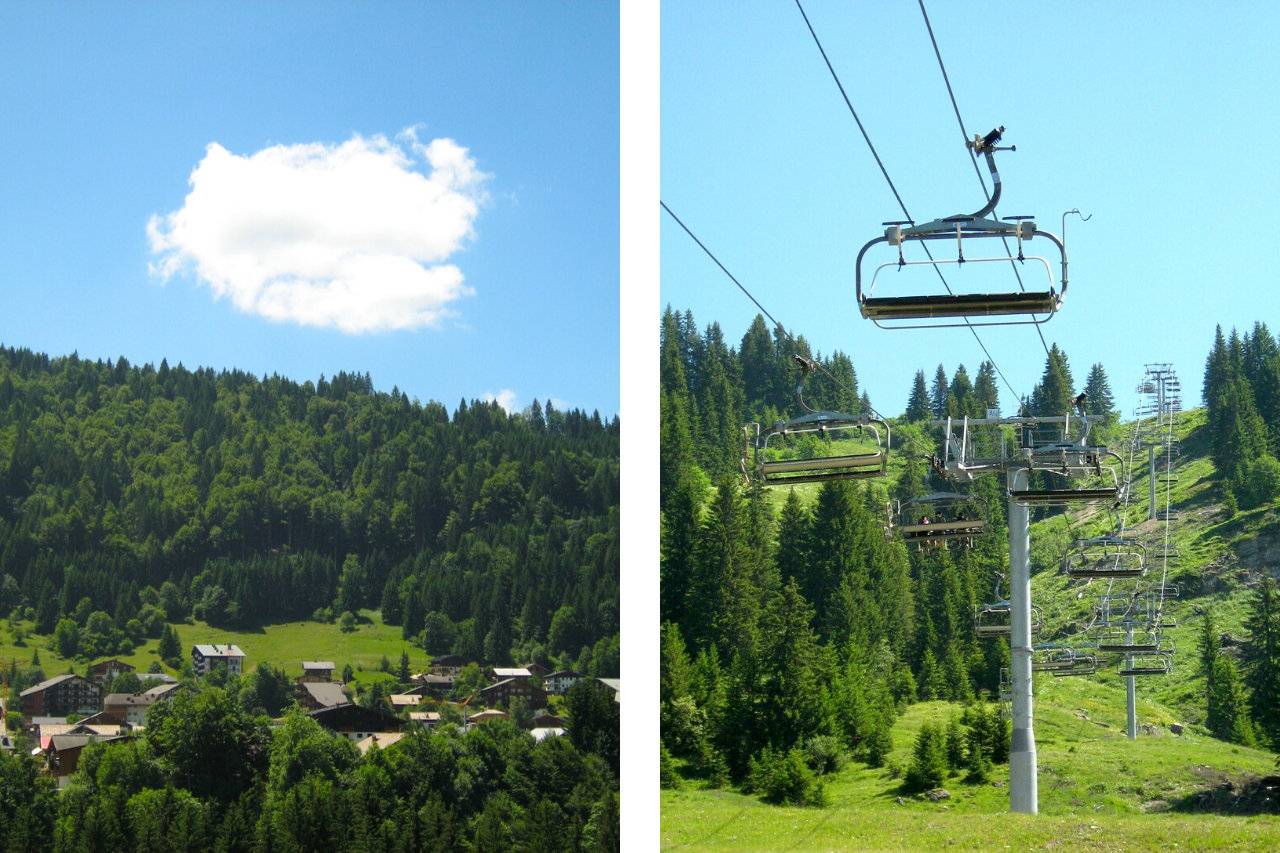 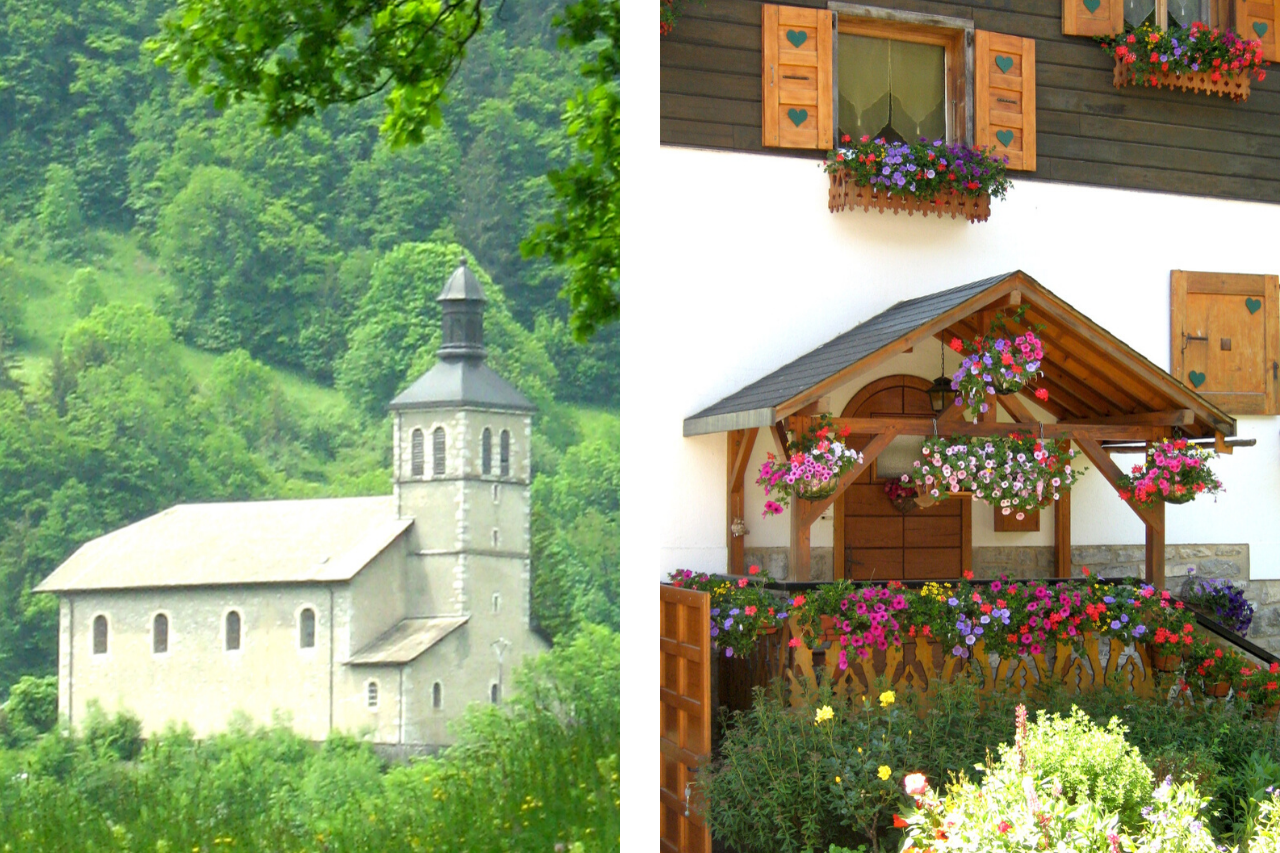 I tried skiing and mountain biking – and, they weren’t for me. As someone who is naturally very risk-averse, the thought of hurting down a mountain in any shape or form just didn’t appeal – combined with the fact that I first lived with the village doctor when I arrived and had a first-hand account of all the injuries he saw, it was an easy “no” from me. I also learned that the art of apres-ski – the drinks, snacks and revelry that came after a day on the slopes appealed much more – and, I didn’t even have to get injured to take part. Win.

While I left skiing firmly alone, I did add a few other experiences to my list – sledding, snowball fights and white-water rafting – which, is not something I ever thought I’d be saying out loud. 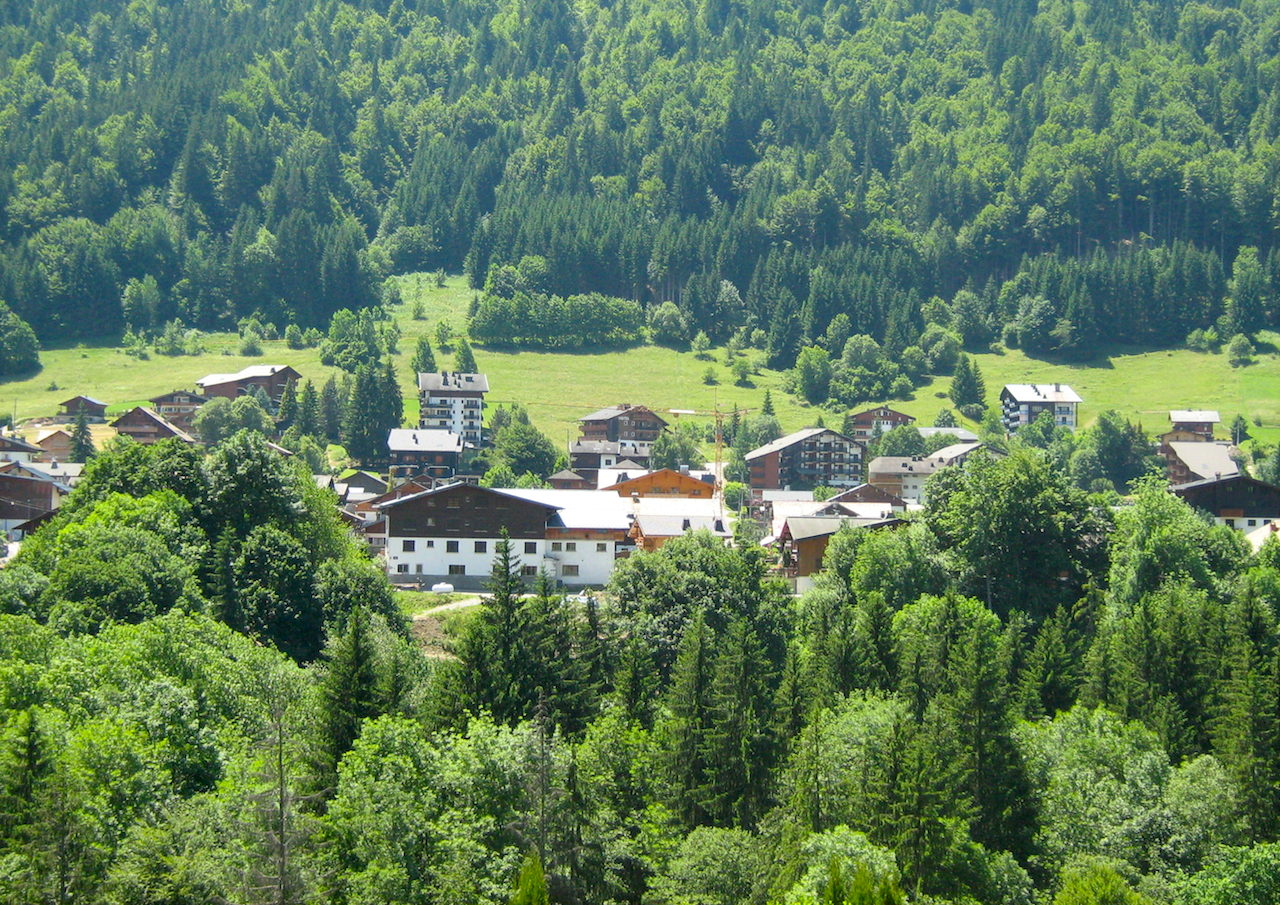 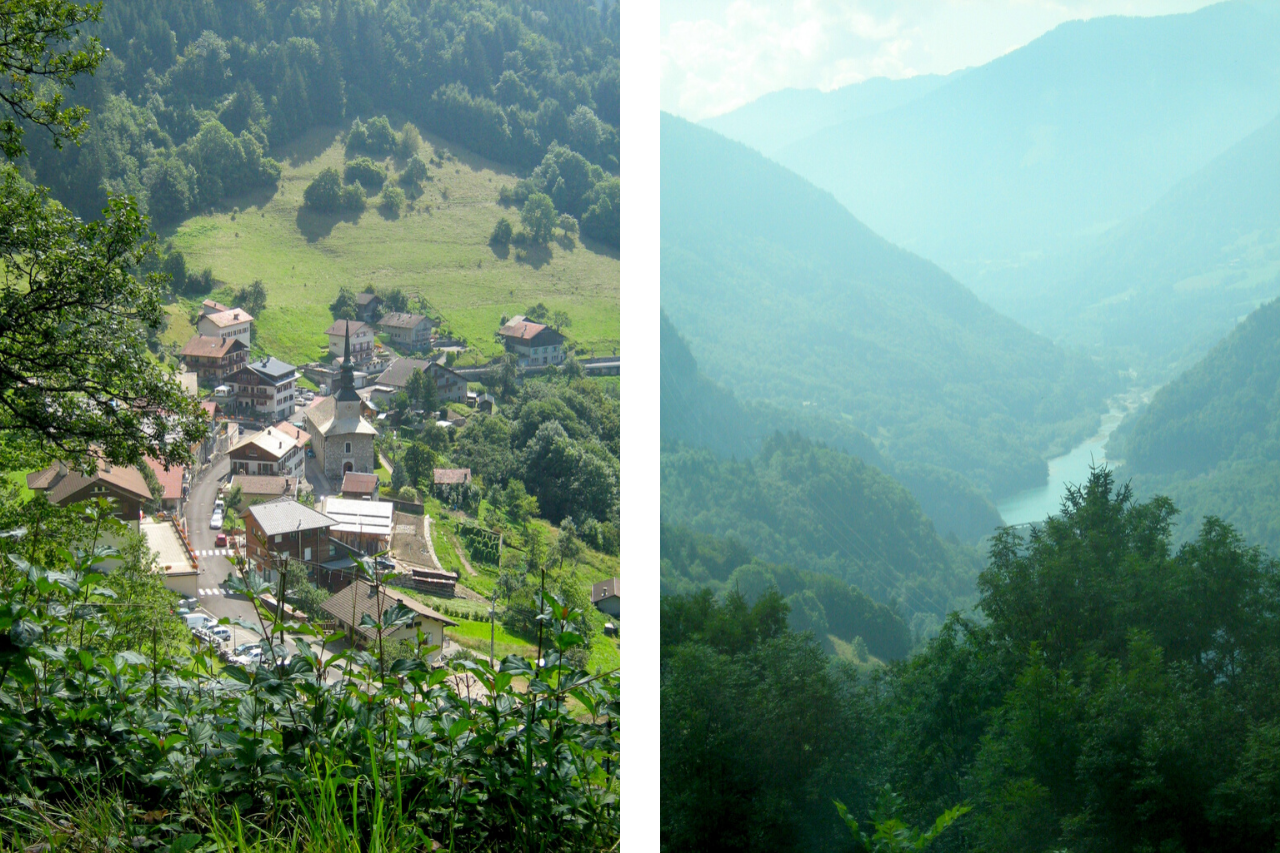 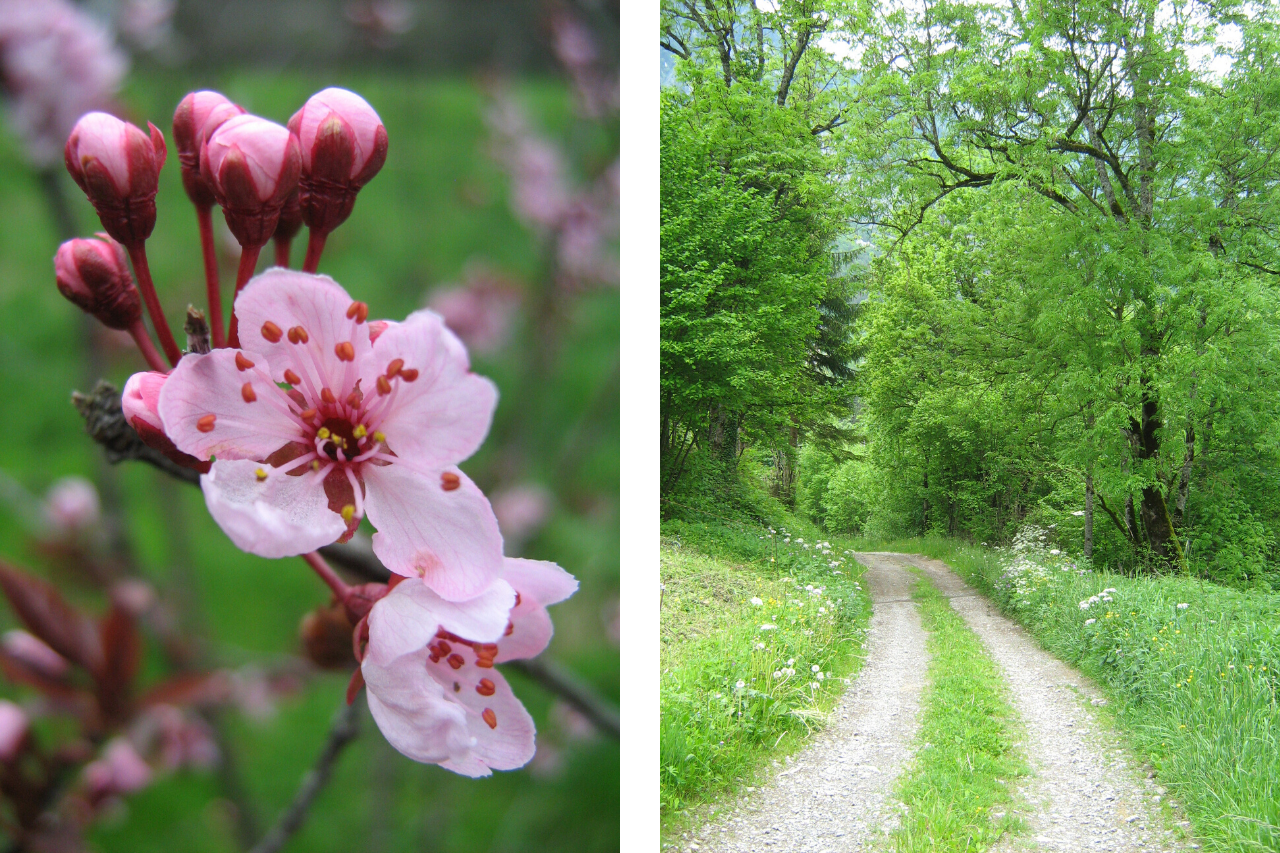 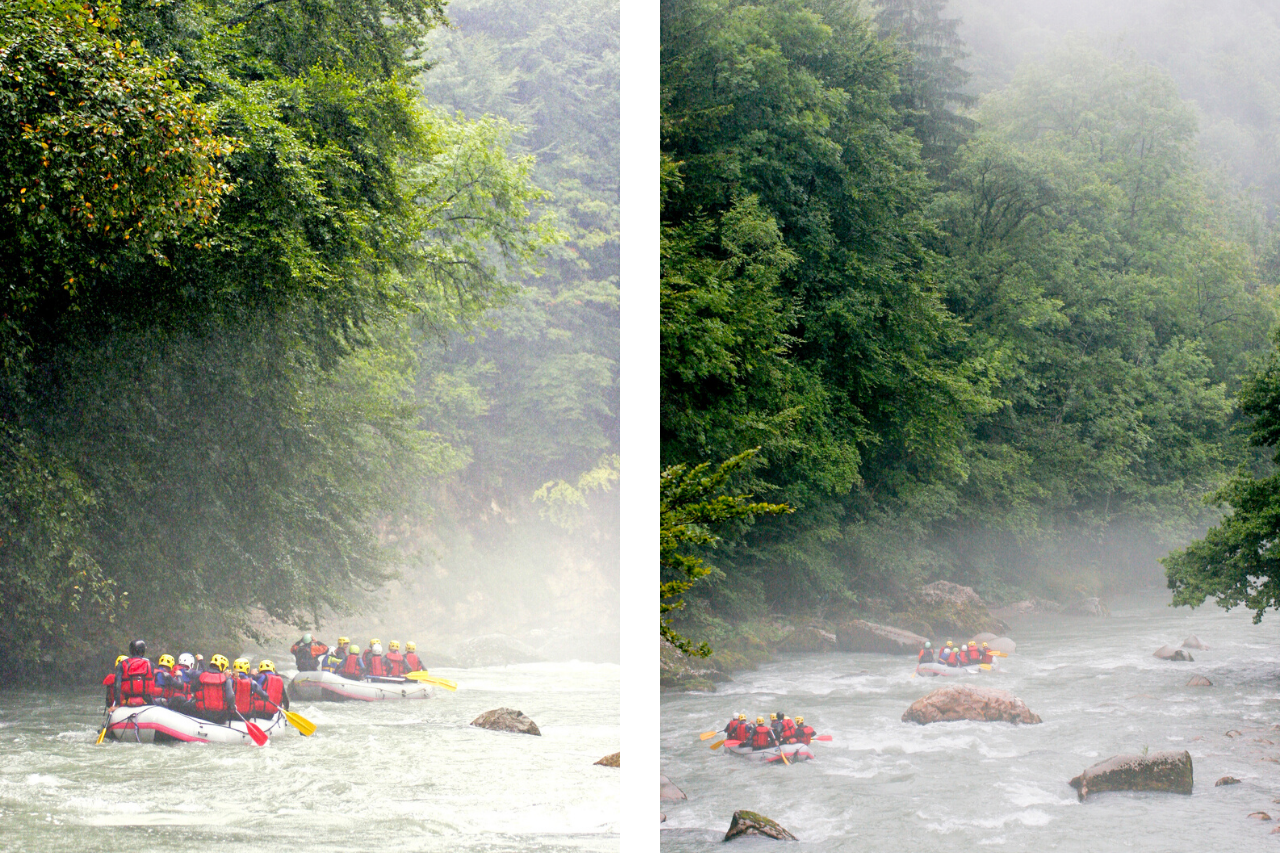 My year was magical. I think about it often, looking back with gratitude and absolute awe – it often feels like another life. When I talk about it, I am frequently asked if I’d go back one day – and honestly, I wouldn’t. It was perfect in every way, and that’s how I want to remember it – I want those memories to remain etched exactly as they are. 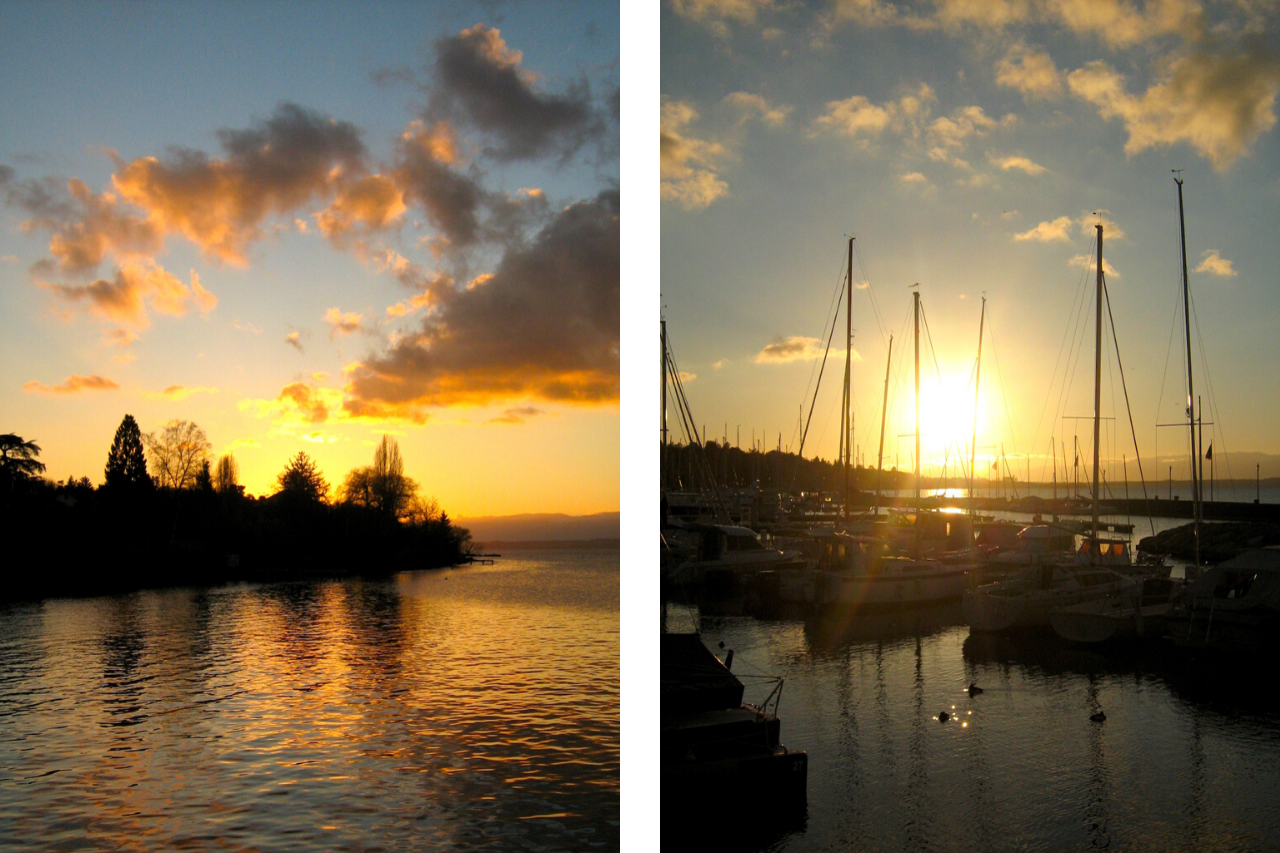 France, I love you.

Lockdown saviours for stressed skin – all under R300

A review of the Grand Daddy Hotel in Cape Town

Snorkeling in the Blue Lagoon

A review of the Drostdy Hotel in Graaff Reinet