This is the second time I’m making this dish. It was first ‘discovered’ one rainy Friday evening, when I’d come home craving comfort food, but without a plan. Scavenging between the fridge and the grocery cupboard, I found pasta and an assortment of vegetables, which were quickly turned into a rib stickin’ bowl of goodness. 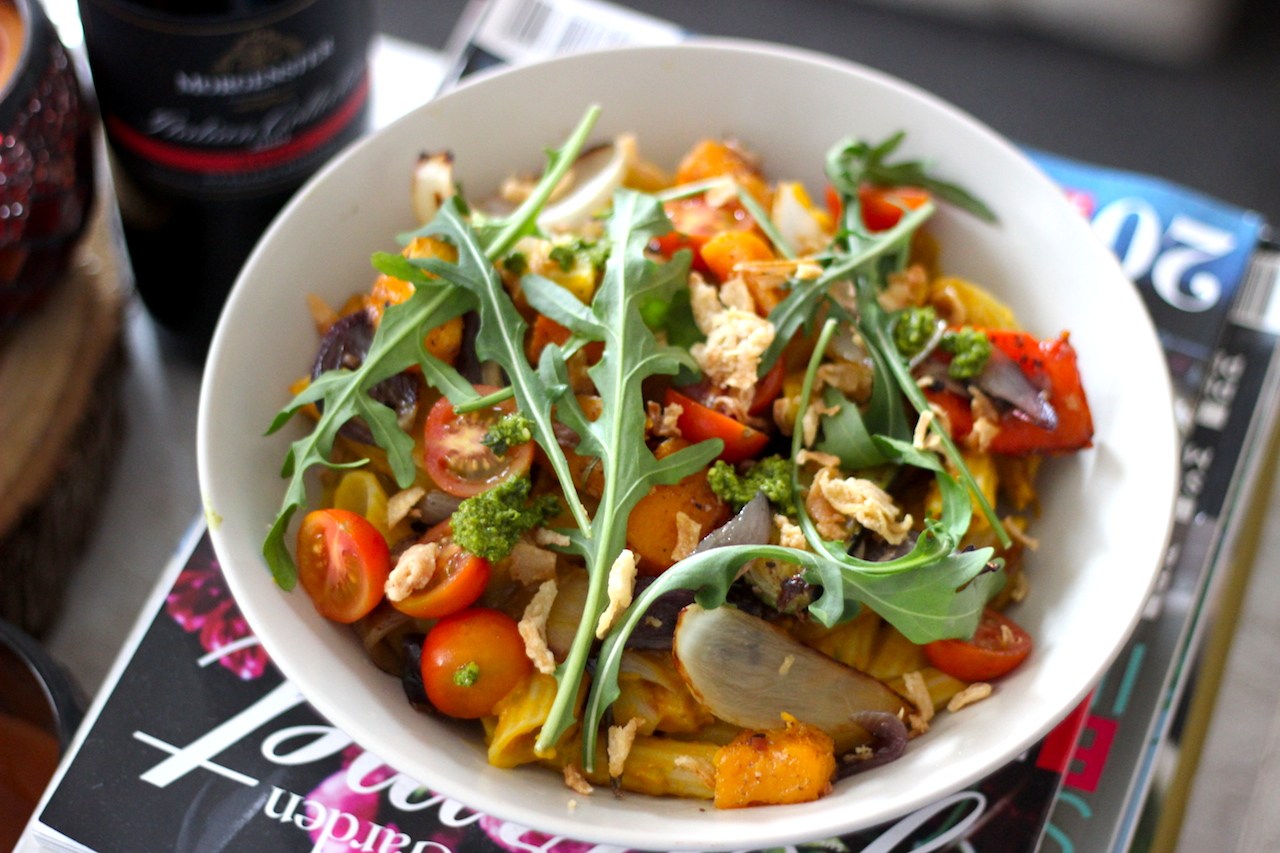 I admit that I do sometimes miss the creamy texture of a cheese sauce, especially when it comes to pasta. So, I’ve had to become a little inventive when it comes to finding something tasty that isn’t tomato-based. Using a base of pureed pumpkin and almond milk, I upped the flavour with the addition of basil and lemon pesto and a few drops of liquid smoke (you can get the latter at Woolworths or online here).

A hint when roasting your onions – don’t be impatient. Give them the time they need to become sweet, buttery petals of deliciousness. They might singe at the edges – that’s ok – but don’t take them out the oven before they are less than perfect. As this is quite an onion intensive dish, it relies heavily on their buttery sweetness. You don’t want to crunch into bits of intense raw onion.

Another confession: Luke is the roast veg master in our home. I’ve included a simple method below, but to be honest, I outsource it to him. I don’t know what magic he uses, but it’s just always better. This pasta keeps really well and makes for fantastic lunches the next day. This serves two, rather generously.

for the sauce:
1 cup pumpkin, peeled and cut into cubes
2 tbsp pesto
1/4 cup almond milk
a few drops of liquid smoke
pinch of sugar
salt and pepper to taste

for the roasted vegetables:
400g assortment of courgettes, peppers, butternut, carrot, broccoli – or any vegetables of your choosing
2 tbsp olive oil
6-8 whole cloves of garlic
2 tbsp fresh rosemary, removed from the stalk
salt and pepper to taste
2 onions, cut into quarters

Preheat your oven to 200 degrees C. Place the roasting vegetables on an oven tray, in a single layer, along with the garlic, rosemary and onions. Drizzle over the olive oil, sprinkle with the salt and pepper and toss gently to coat. Place in the oven and allow to roast until vegetables and tender and starting to colour – approximately 40 minutes. Check half-way through and toss vegetables again, if needed.

To make the sauce, steam the pumpkin until very tender. Once cooked, add half of the almond milk, all of the pesto, the sugar, liquid smoke, salt and pepper. Blend – either with a stick blender or in a jug blender – until smooth. Taste for seasoning and consistency. If too thick, add the remaining almond milk and blend again. You’re looking for a sauce that is thick enough to coat the pasta, without being stodgy.

Once the vegetables have roasted, remove the onion quarters and garlic from the tray. In a large dish, mix the cooked penne with the onion, garlic and sauce – gently mix until well-combined. To serve, spoon the roasted vegetables over the pasta and scatter with baby tomatoes, rocket, extra pesto and dried onion flakes, if desired.