It’s been a year to the day since I wrote about our last lunch at La Colombe. During that year, I have said, without hesitation – and to anyone who would listen – that it was the best meal of my life.

So, when we were invited to return and sample their new summer menu, expectations were already sky high. While we were undeniably excited to return, a small part of me was a little hesitant – what if I had hyped up our experience over the past year – and was left disappointed by this meal?

This is a long review. There were eleven courses and as many wines. If that’s more words than you have time for, then read only this:

La Colombe managed to exceed every expectation I had, leaving us speechless with wonder. This meal will go down as one of the best experiences of my life. Book here, now.

For those with a little more time on your hands, grab a cup of coffee and join me on our culinary journey. 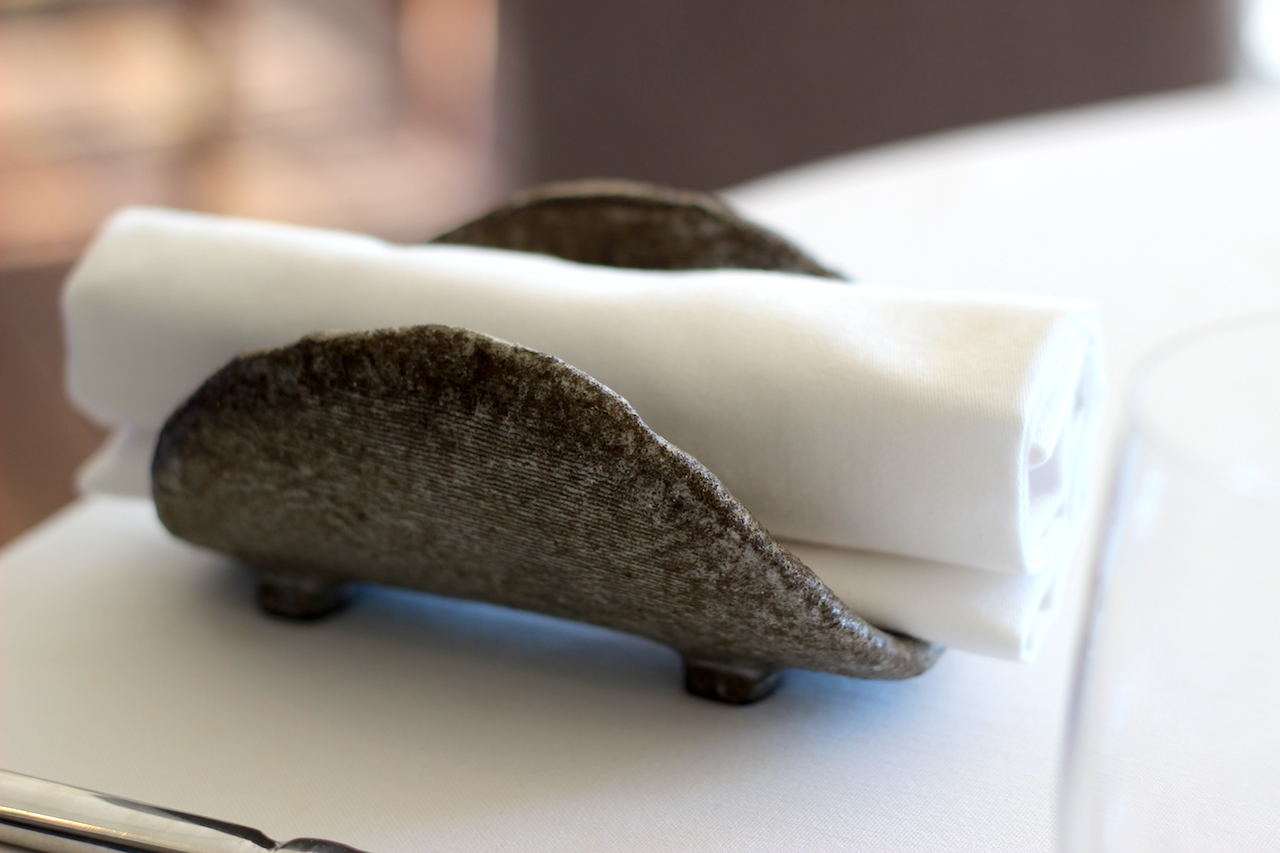 First, some background. We were invited to try the restaurant’s new menu, as we head into the summer season. During the restaurant’s winter closure, Head Chefs Scot Kirton and James Gaag both undertook independent culinary trips to the US, exploring the local cuisine and dining at some of the top restaurants in the country, to bring back inspiration for the new La Colombe season. 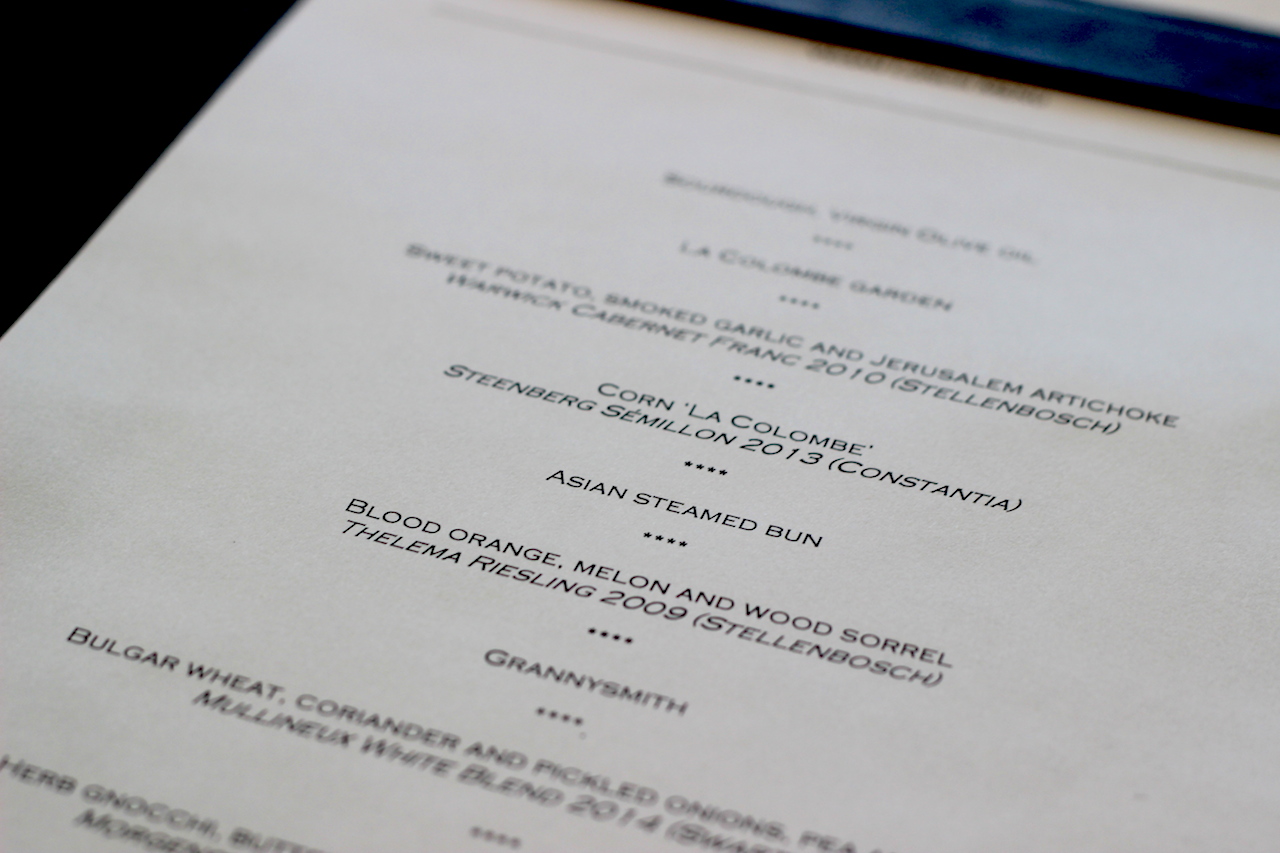 Apart from new dishes, the format of the La Colombe menu has also changed. There are no longer a la carte options, but rather carefully curated menus that focus on the experience of dining – either eleven courses, or a slightly more limited, but still multi-course menu. The focus on experience has also been taken to the table, with at a chef personally presenting at least one dish to every table. I adore this concept, as it not only makes the meal more personal, but also allows you to fan-girl a little in person – which is exactly what I did when I saw James and Scot.

Now, onto the food. 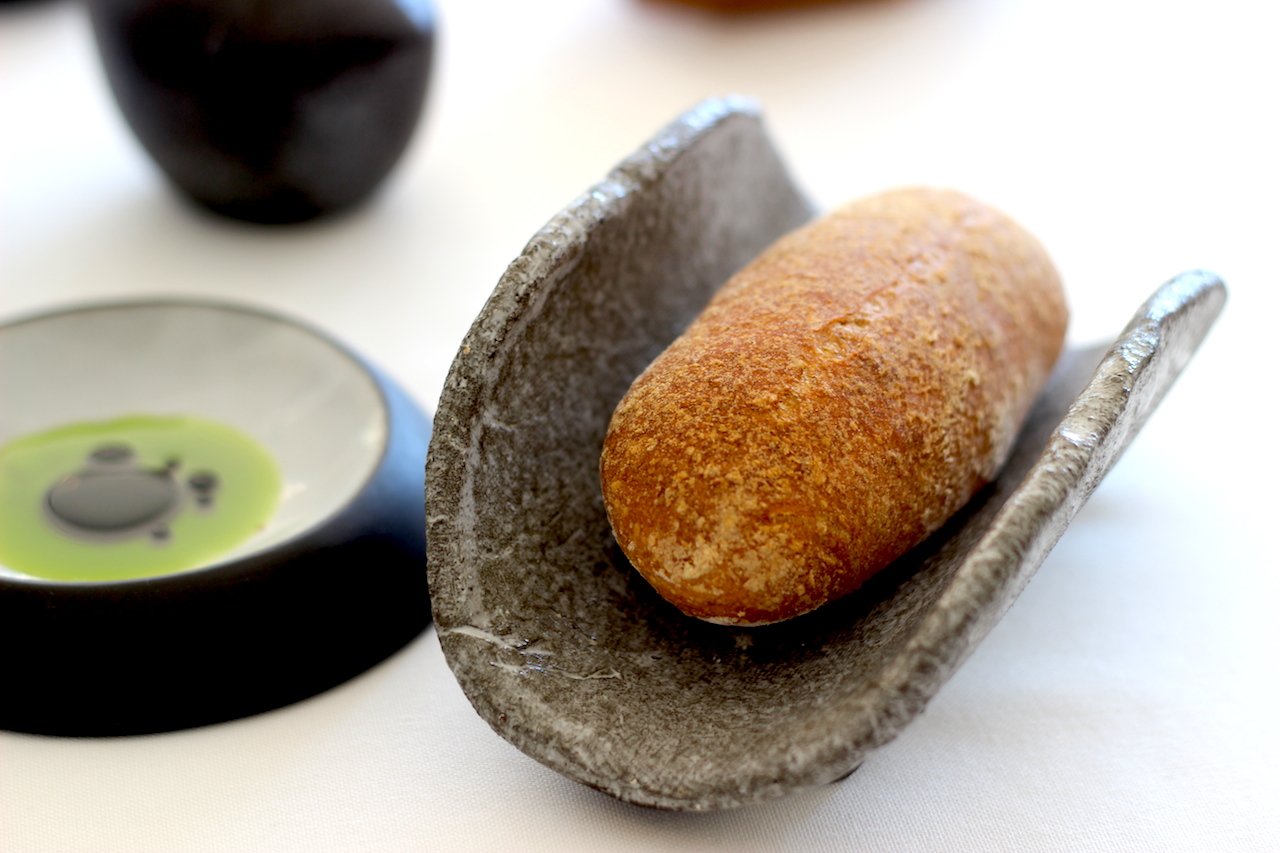 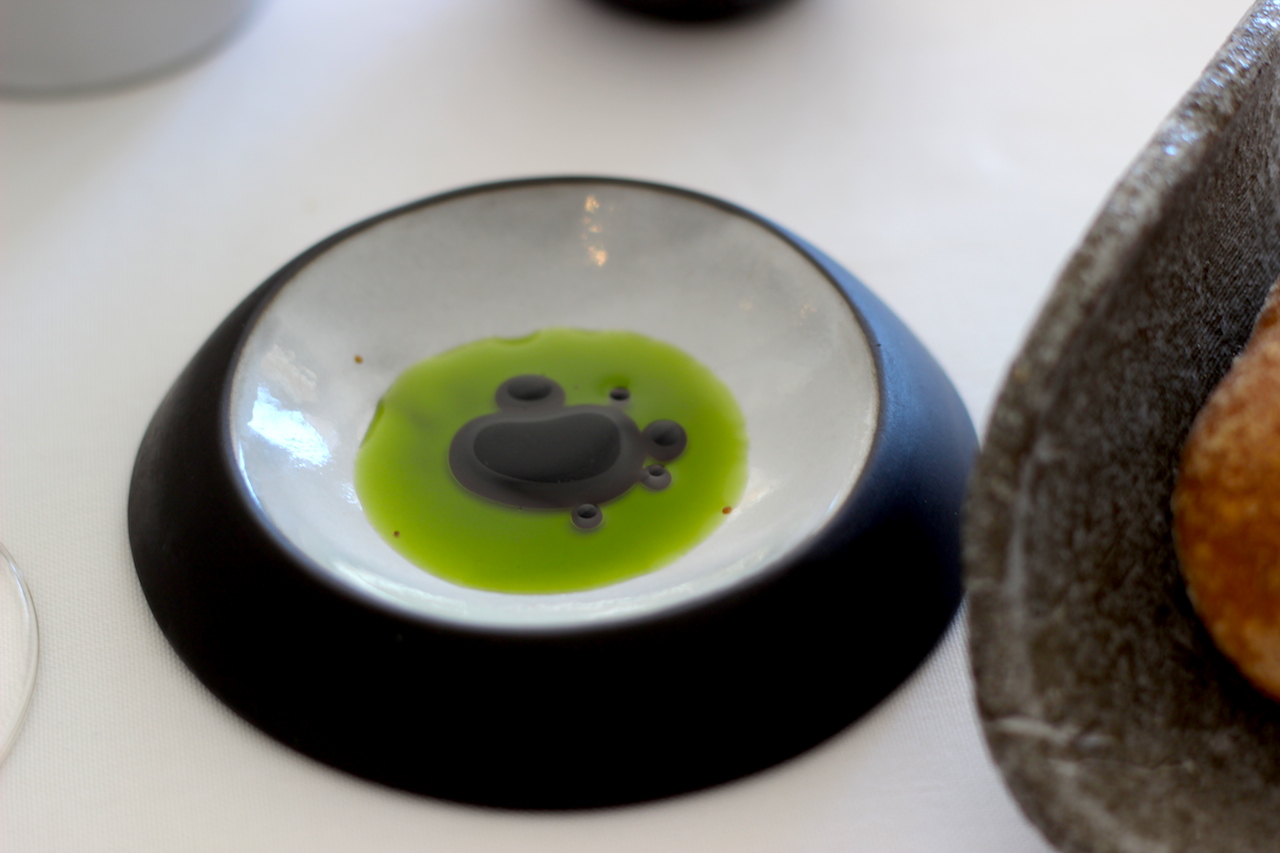 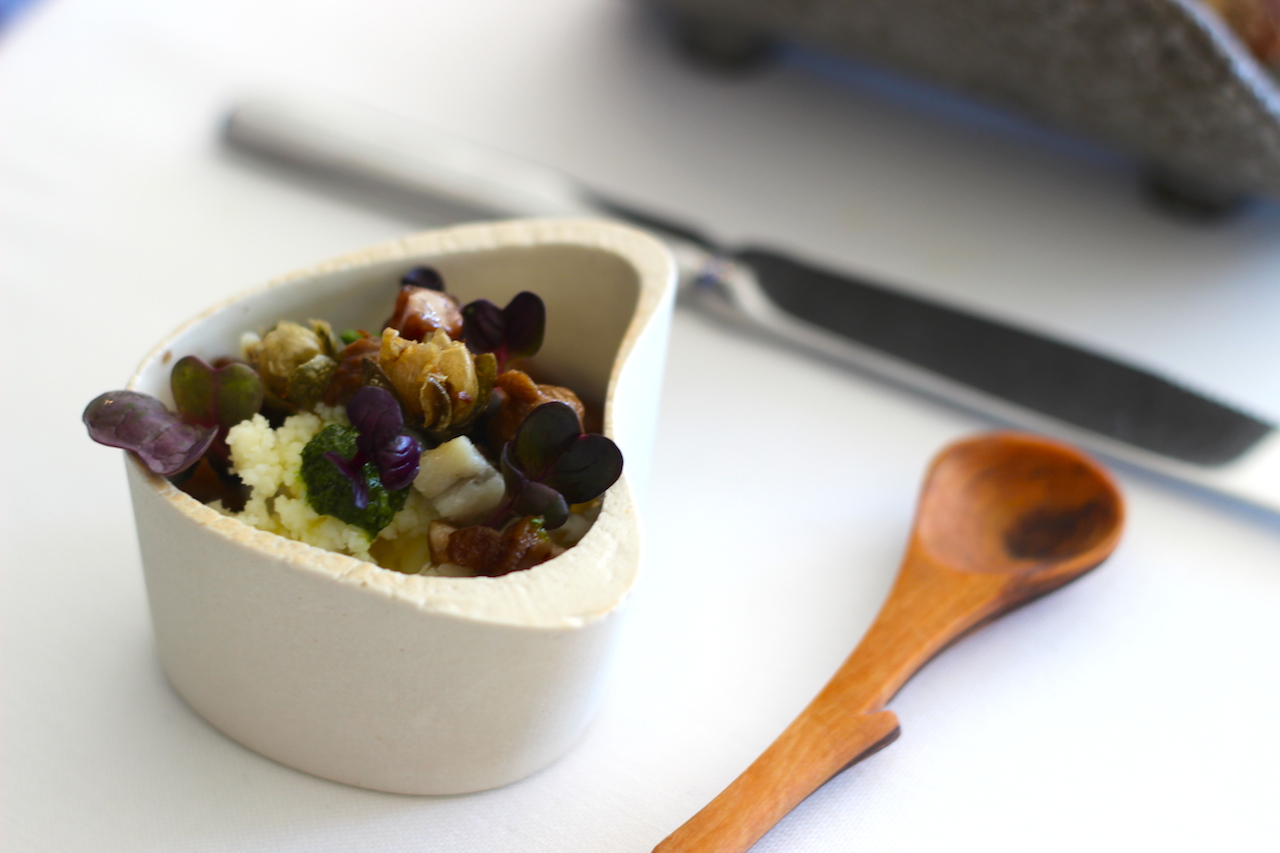 They say that you can judge a good restaurant by its bread, but as La Colombe is home to the best chef in the country and the 76th best restaurant in the world, that would seem insulting. The warm sourdough loaves arrived, with a thin crust and chewy interior – for me, to be enjoyed with wild garlic oil and balsamic vinegar, while Luke had a compound butter of bone marrow and pickled fish.

More intrigued than skeptic, he took his first bite, before commenting that the fish was subtle, adding salt and complexity more than overt fishiness, and proceeded to clear the themed-ramekin of its contents. If the aim of this course was to awaken and prepare the palate for the rest of the meal, then consider it a job well done. 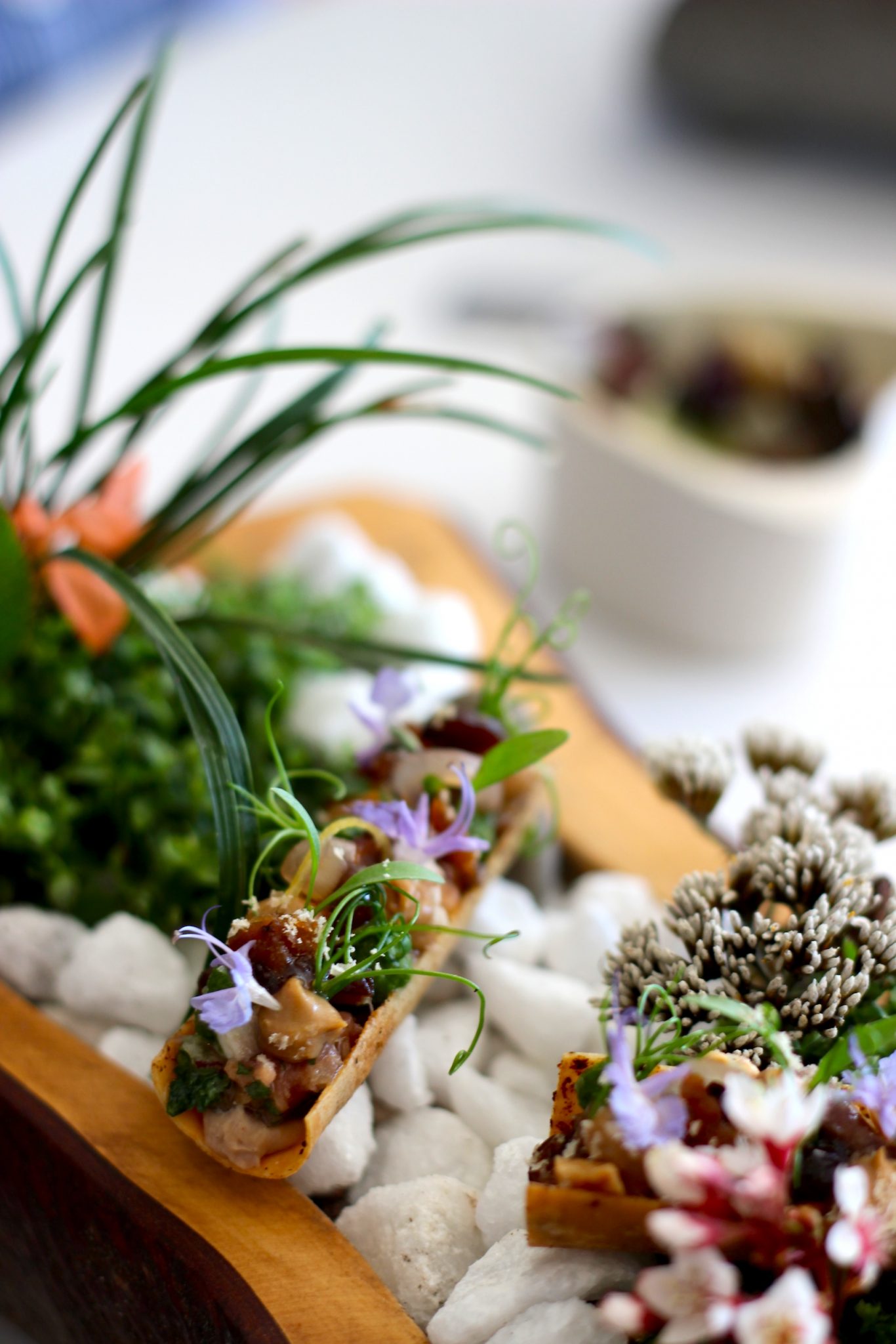 The next – impossibly beautiful – dish arrived at the table. Once we had managed to close our gaping jaws, we were told that the garden included thin phyllo pastry with chicken liver parfait (for Luke), porcini mousse and sherry gel. Crunchy, earthy and slightly sweet, it was – like we would find the rest of the meal to be – perfectly balanced.

Next, two heavy orbs were placed in front of us, before being ceremoniously lifted, allowing wafts of smoke to fill the air. Once the smoke had cleared, a riot of colour awaited.  Tempura sweet potato, the most delicate bok choi leaves, flowers and smoked garlic were surrounded by a fragrant sweet potato puree. This was paired with the Warwick 2010 Cabernet Franc – a varietal neither Luke nor I have had much exposure to when not in a blend. With hints of rosemary, it was a smooth, herbaceous partner to the dish, tempering the sweetness of the vegetables. 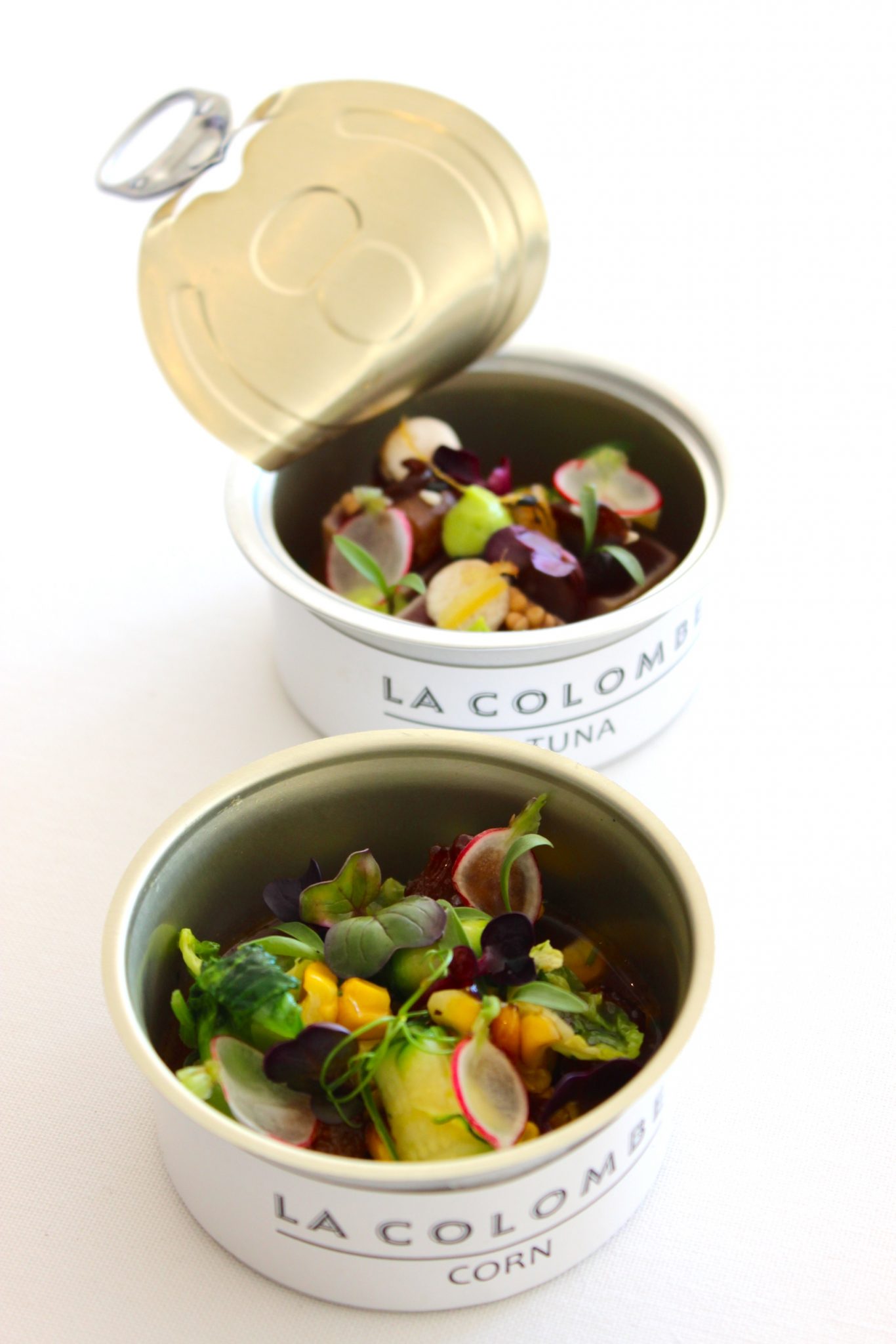 Although we’d had this signature dish, in principle, from La Colombe last year – it was even better this year. While Luke’s kept the main signature ingredient of tuna, mine changed from tomato last year, to corn this year – and, it was incredible.

Sweet and charred with freshness and crunch from the thinly sliced radish and green leaves, we both poured out every last sip of broth onto our spoons – deeming it inappropriate to slurp straight from the tin. The thought did actually cross my mind.

It was lovely having it paired with two different wines – the Steenberg Semillon was always going to be lovely, but it was the Camissa that surprised us. Made from 57% Muscat de Frontignan, 29% Mourvedre and 14% Grenache, it was a fragrant, but serious wine – and a favourite for both of us. It’s definitely going to be a bottle we add to our wine rack. 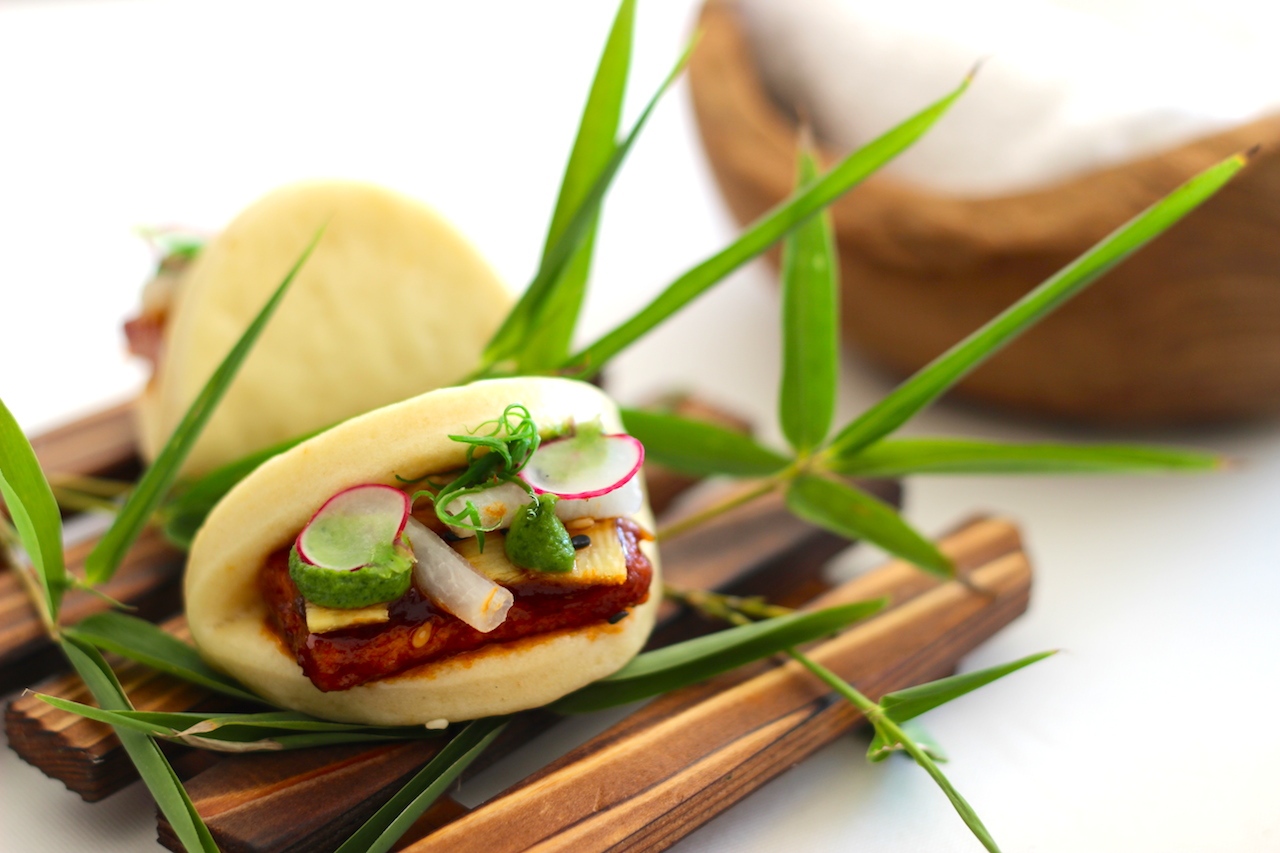 Almost a little half-way snack, a sweet-sticky-fresh-and-fragrant pork bun (for the Mr, tofu for me) arrived, with an incredible glaze, charred pineapple, fresh radish and coriander pesto. It was demolished in two bites, as we eagerly awaited the arrival of more. As we were soon to discover, eleven courses doesn’t mean you can’t still be greedy. 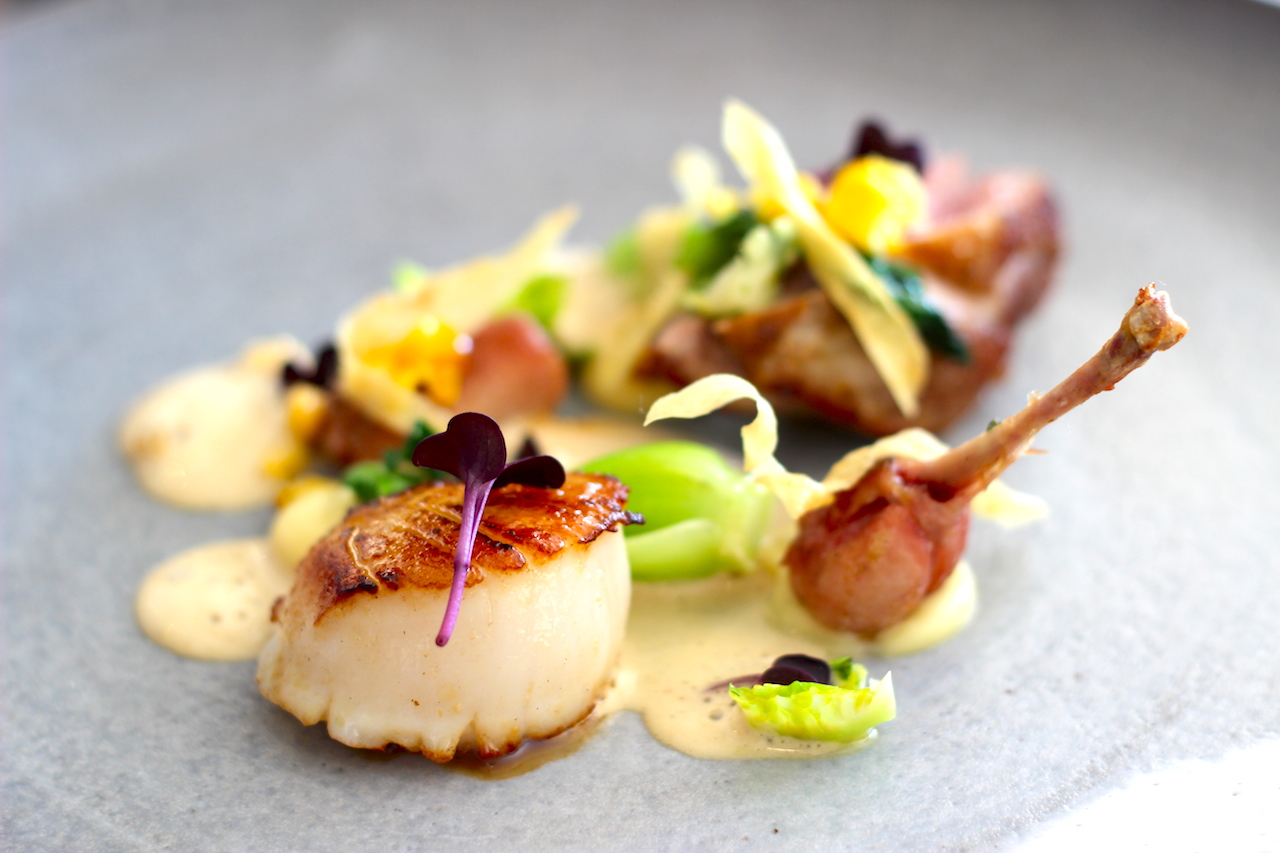 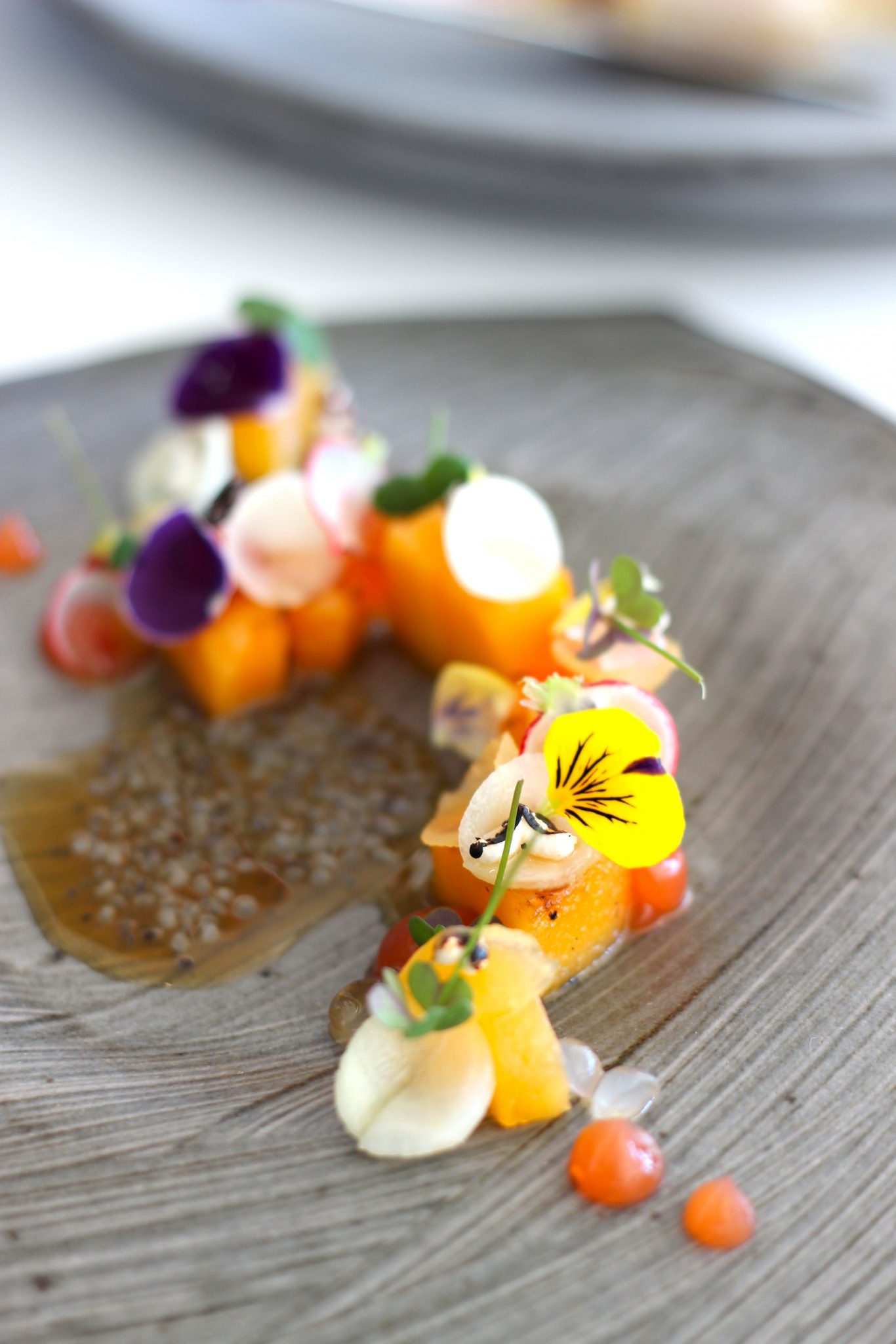 I watched Luke cut the scallop with the pressure of his resting fork – and nothing of this plate remained except for a singular bone. Paired with the Tesselaarsdal Pinot Noir, a new label belonging to longstanding Hamilton Russell Vineyards’ employee Berene Sauls, it was still a relatively young wine, slightly cloudy in the glass, but remarkably mature for its age. Definitely one to look out for – if you spot it in store, be sure to grab a few bottles.

I had reservations about this course, simply because I saw Riesling on the menu – which is officially my least-loved white varietal after Sauvignon Blanc. After promising that I’d keep an open mind, I tried it with the compressed griddled melon, blood orange and uzo gel, and compressed radish. With petrol on the nose, I can confirm that this was a course where the pairing highlighted each element, ensuring they were better together than apart. 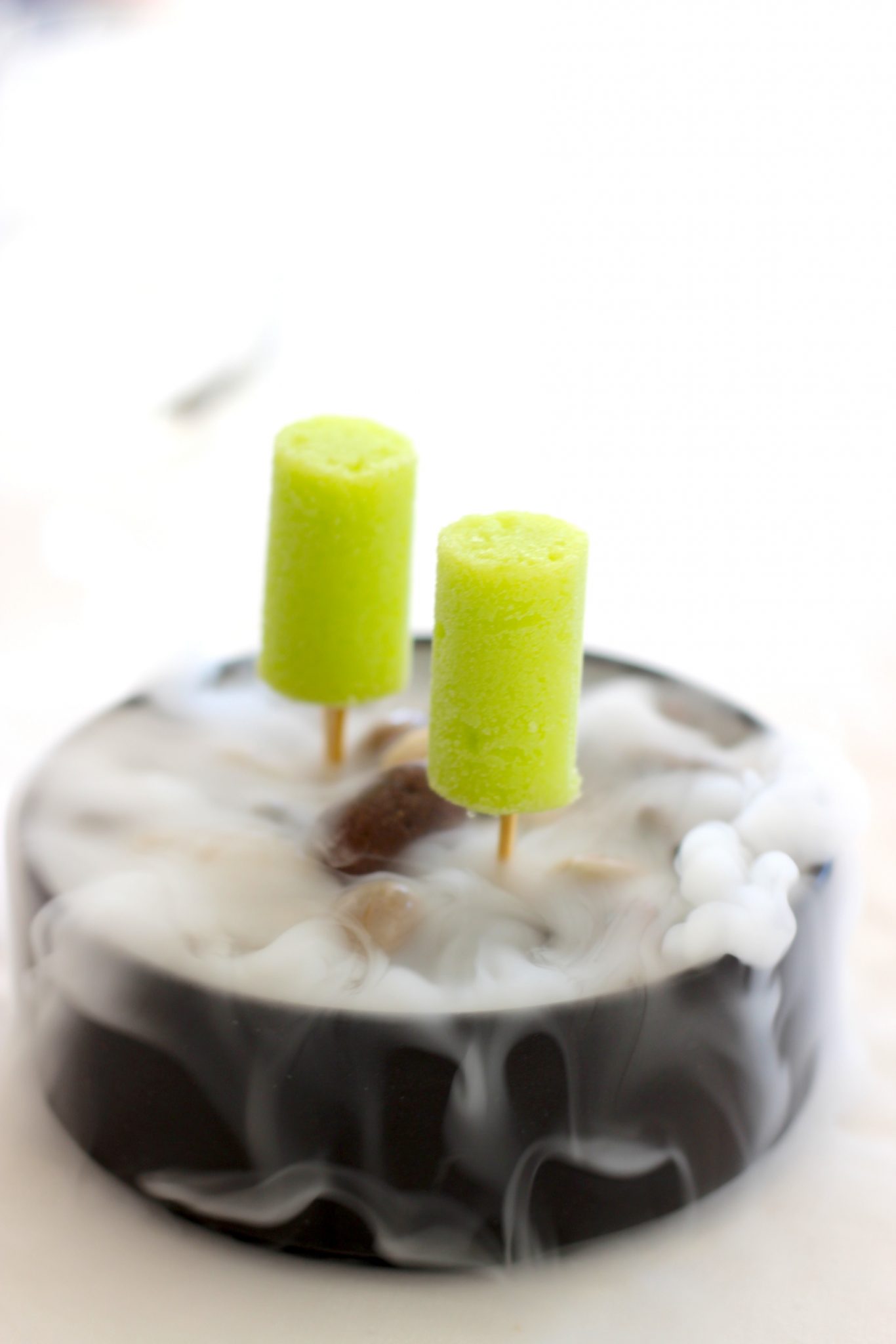 When we saw this on the menu, we had a little “aaah” moment, remembering the cocoa butter spheres from last year, and expecting a repeat. Not so, said La Colombe. While the flavours remained mostly the same, this year saw them presented as ice lollies in a bed of liquid nitrogen. A perfectly refreshing respite, before we headed into the heavy hitters of the menu.

A note here about Melissa. She took us through our menu last year – calling her a waitress is an injustice – and we were thrilled when she popped up at our table again this year. While La Colombe is, of course, all about the food, fine dining refers to so much more than what is simply on the plate. The ambience, decor – and, of course, service – all plays a vital role. And, Melissa, is an integral part of that experience. A consummate professional, we also shared a few laughs and made her pry empty plates form our hands, promising that they would be well-loved when they hit the kitchen. She is an absolute gem, and I hope that everyone who visits La Colombe gets to meet her. 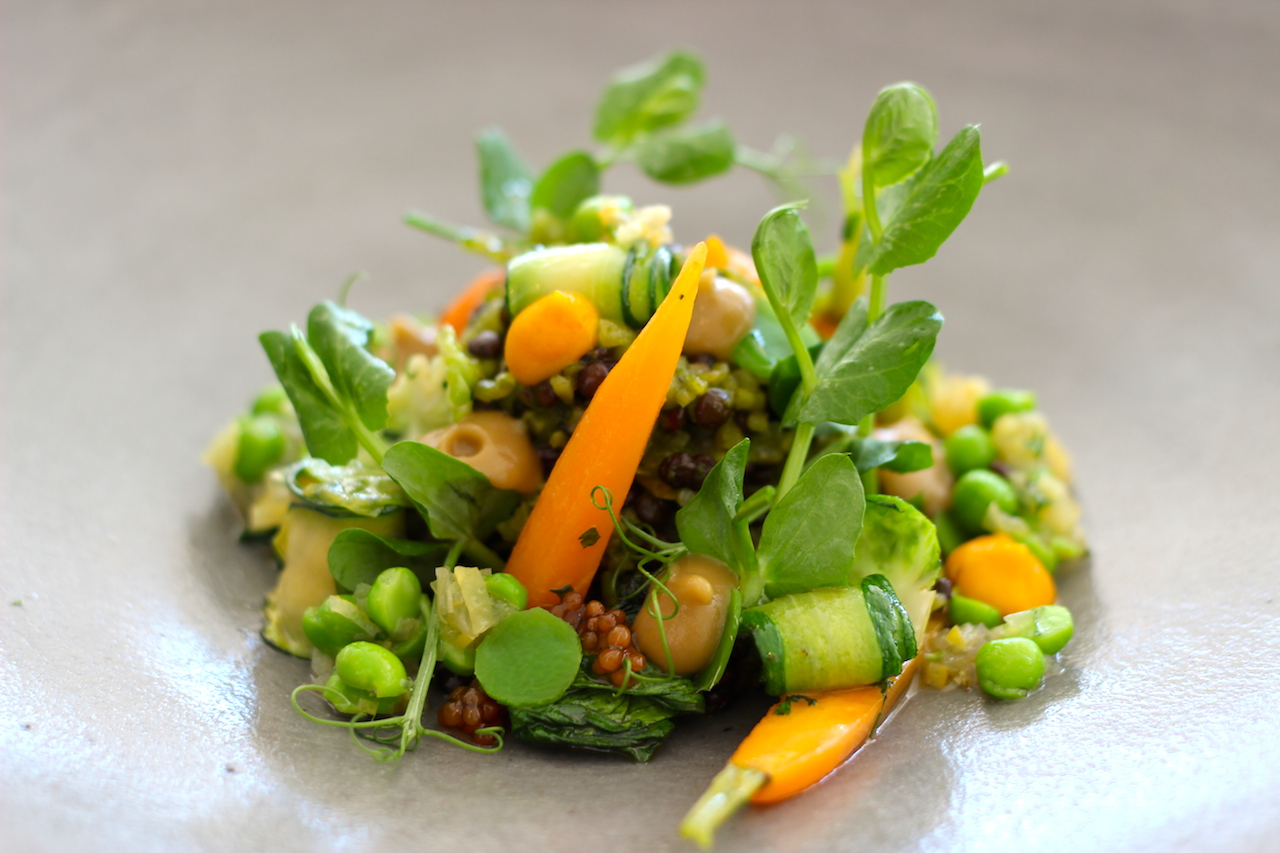 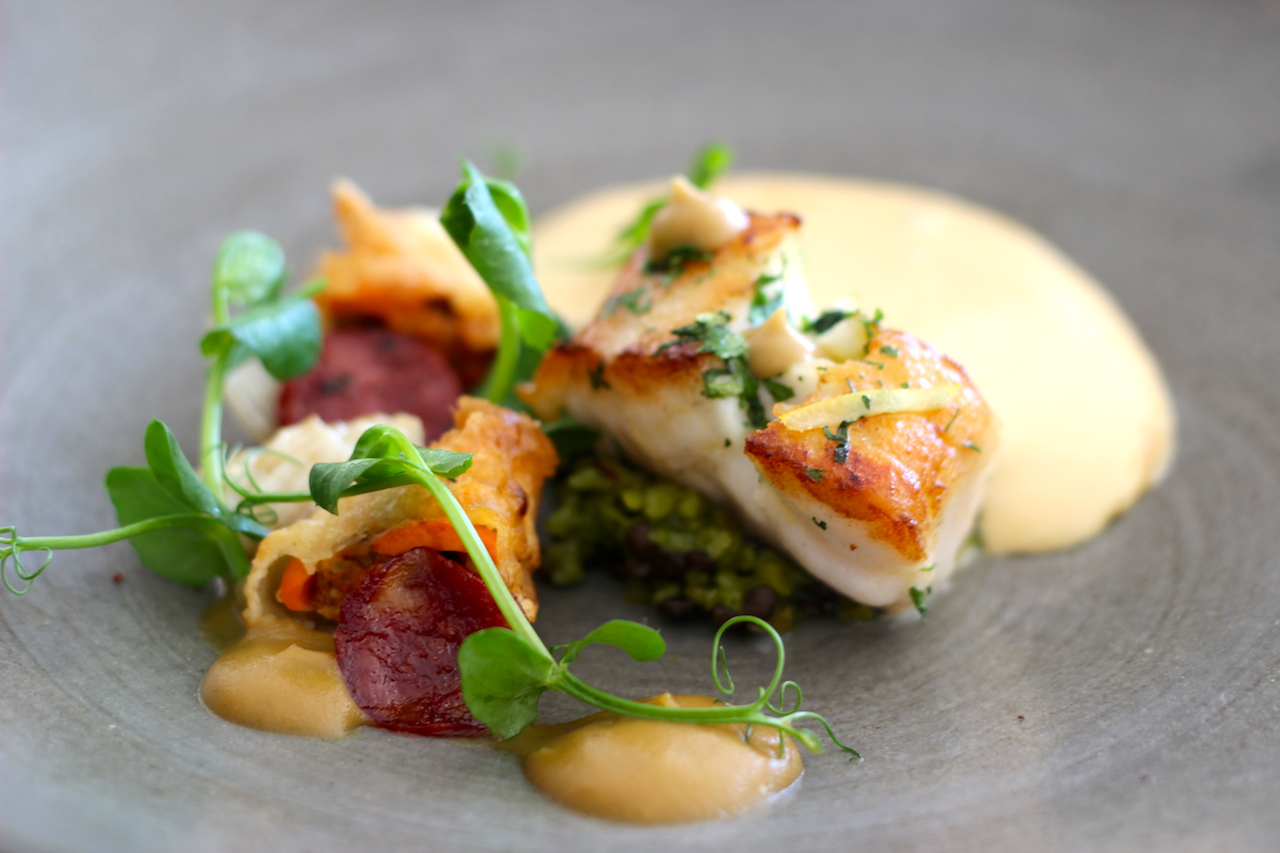 This is where the menu started getting intense. The meal thus far had been fantastic – filled with standout dishes – but this marks the stage where we started staring at each other in wonder, mouths agape. My dish sounded someone humble on the menu, and while pretty on the plate, it did little to hint at the intense flavours that awaited.

With fresh peas, a sweet onion puree, mustard seed dressing, fragrant lemon and gorgeous baby vegetables – it was a spectacular spring dish, and one I could have had in buckets.

Luke’s dish featured homemade chorizo, perfectly cooked linefish – of course – and a velvety soubise. He had a dollop of the flavours I experienced, and immediately understood. Phenomenal. 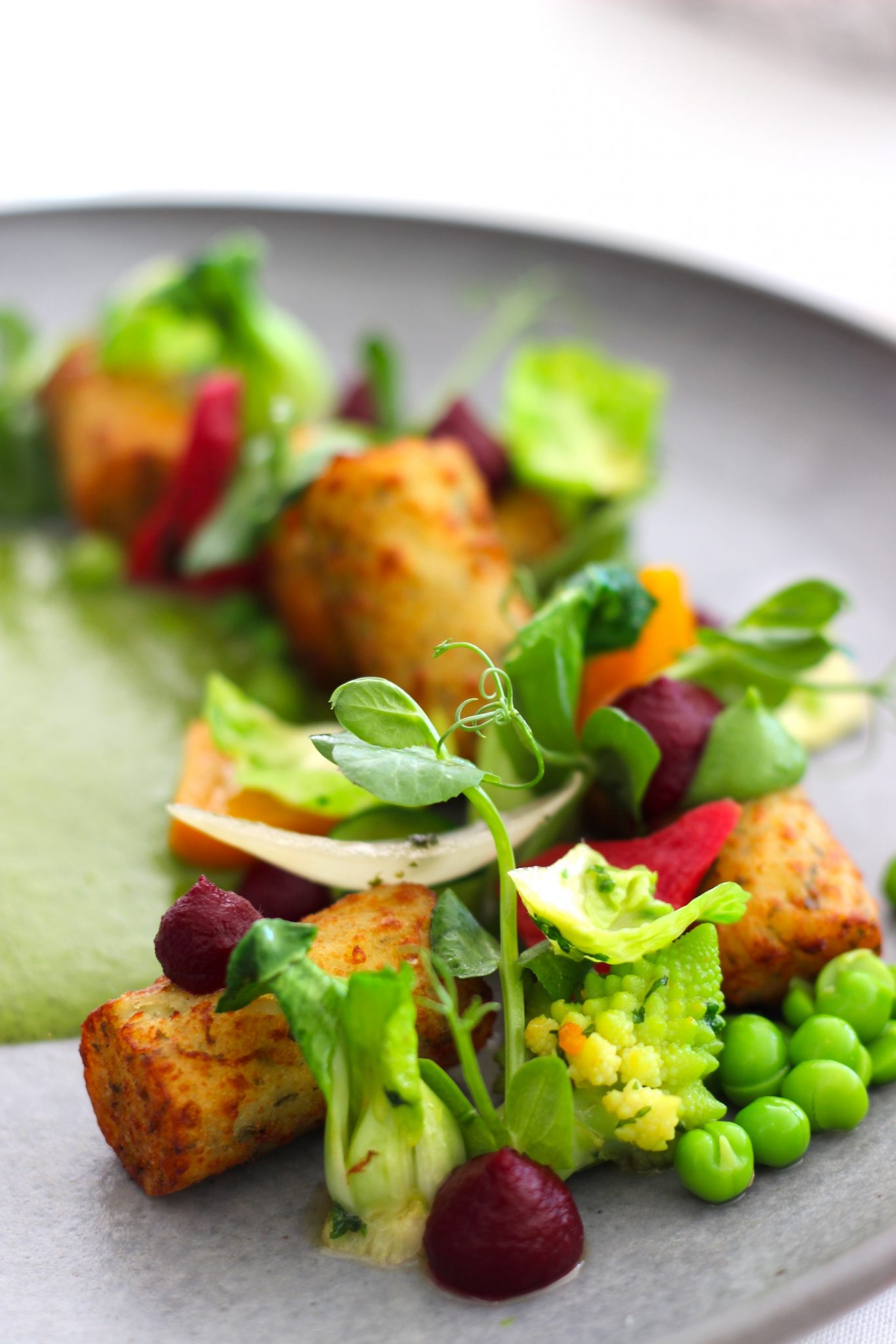 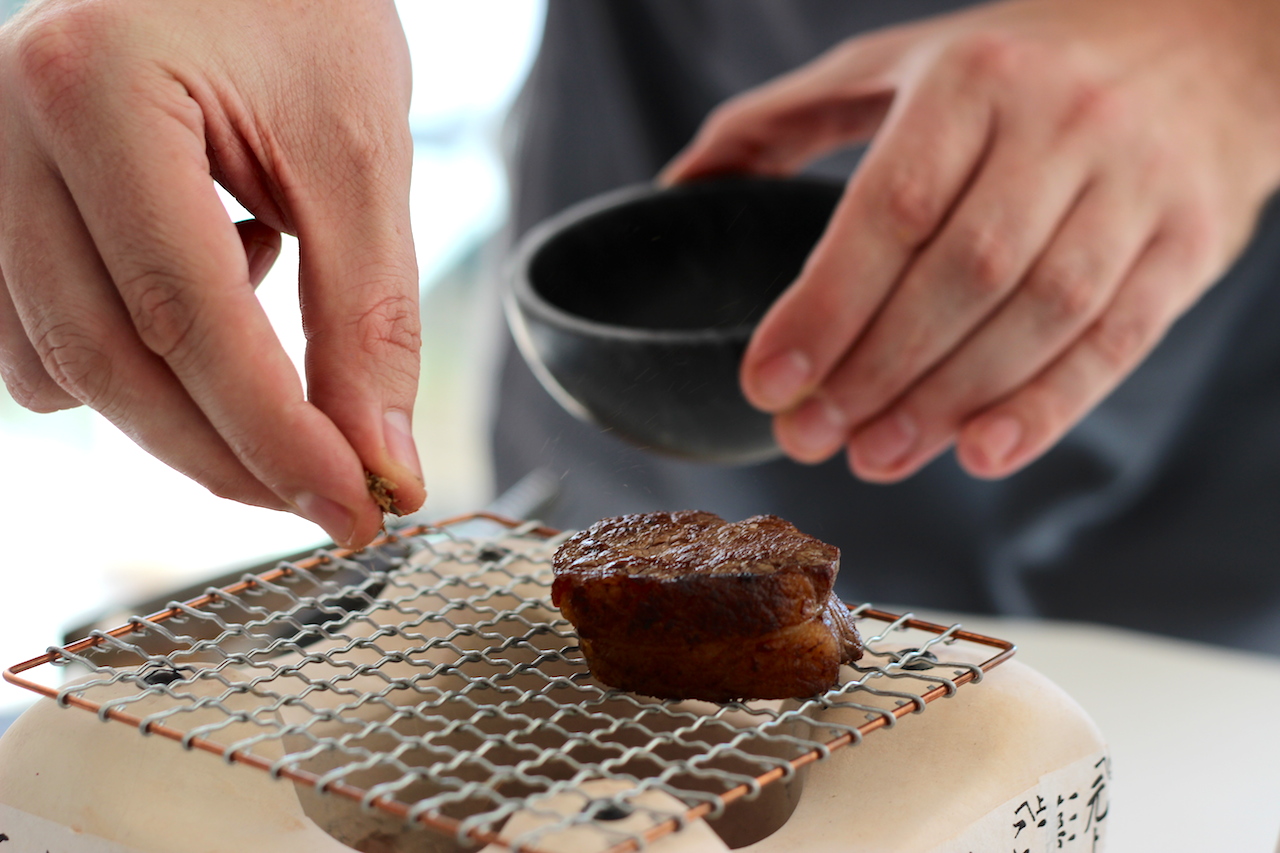 We quickly realised that we were being swept up in the natural progression of the menu, without even realising it. This would be the main course – with the one before it hitting such a high note, we struggled to see how it could be outdone. Then, a grill was placed at the table, quickly followed by Scot himself, who would proceed to hand-smoke Luke’s piece of waygu beef. 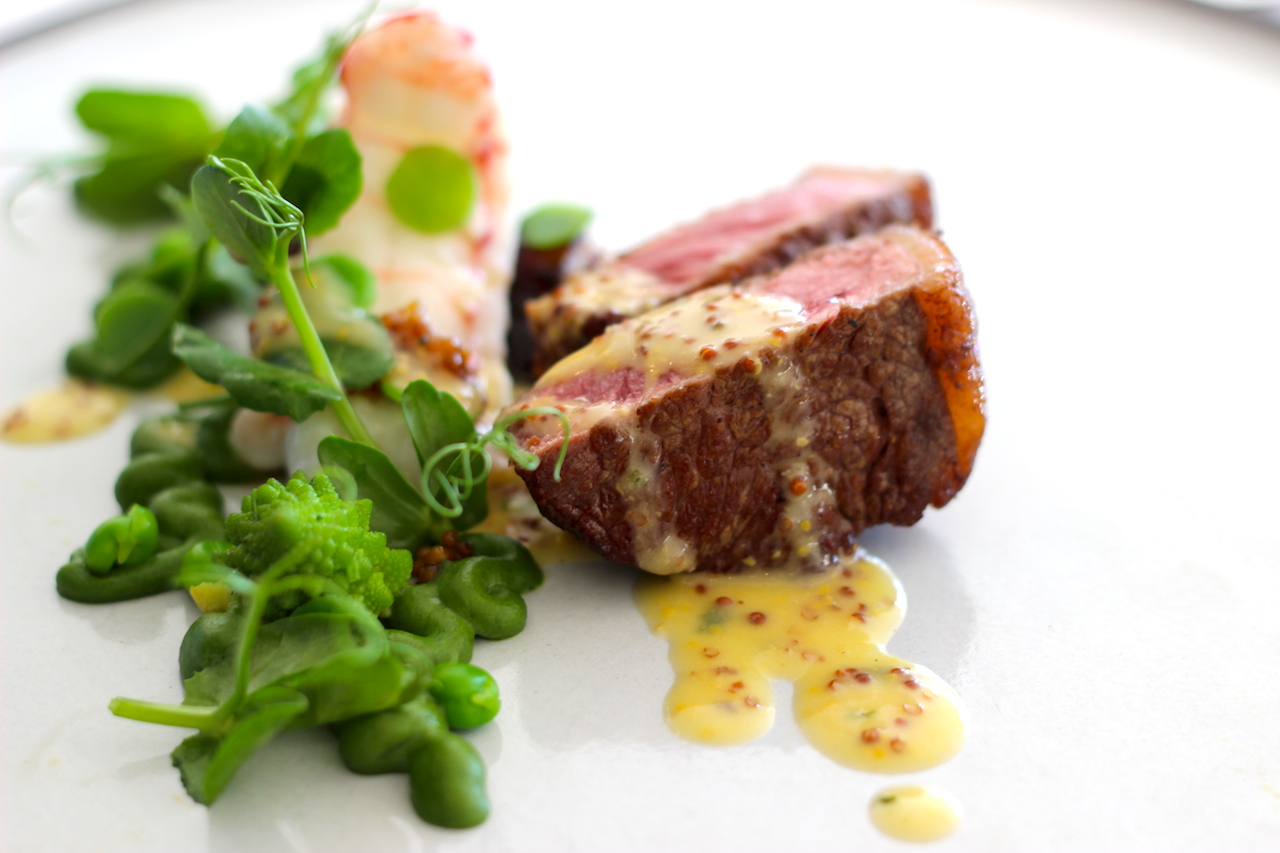 What resulted was, what Luke would call, a death row meal. If he were to die then, he would die a happy man. He might have also wondered out loud why more diners weren’t in raptures or drying tears from their eyes. Suffice it to say, he quite enjoyed the meal.

My dish was art on a plate. Crispy tubes of handmade gnocchi, romensco, beetroot puree and a generous puddle of salsa verde – I felt like a traitor, having declared the previous dish my favourite only moments ago, I had to quickly re-examine my feelings. Can you have two favourites? Sadly, the dessert that was to follow would soon increase that number to three.

We both enjoyed this course with a special 2003 vintage of the Morgenster Red Blend, served in Riedel glasses almost the size of my head. While thirteen years old, it was still remarkably fresh and fragrant, with a backbone of red berries, chocolate and mocha. 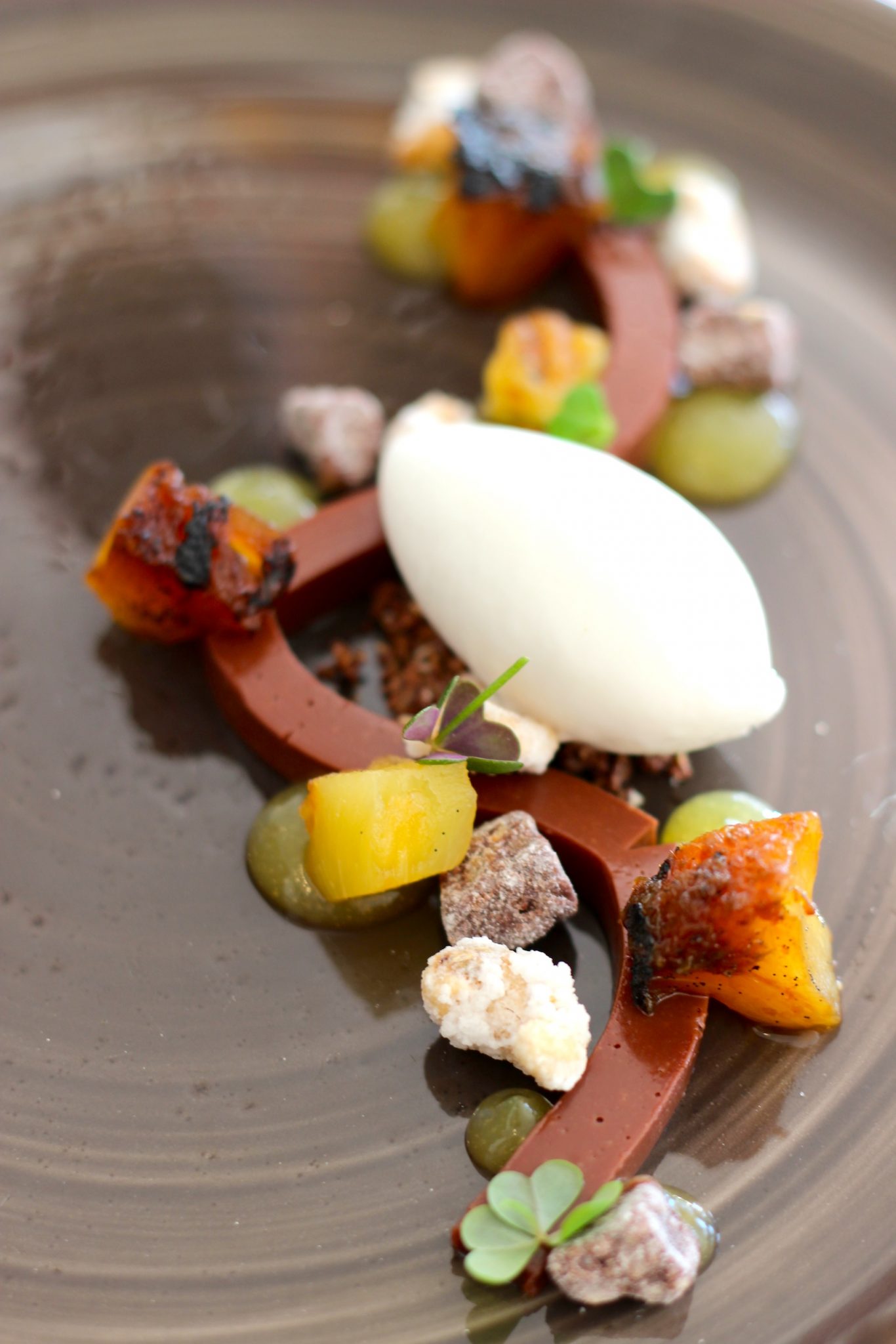 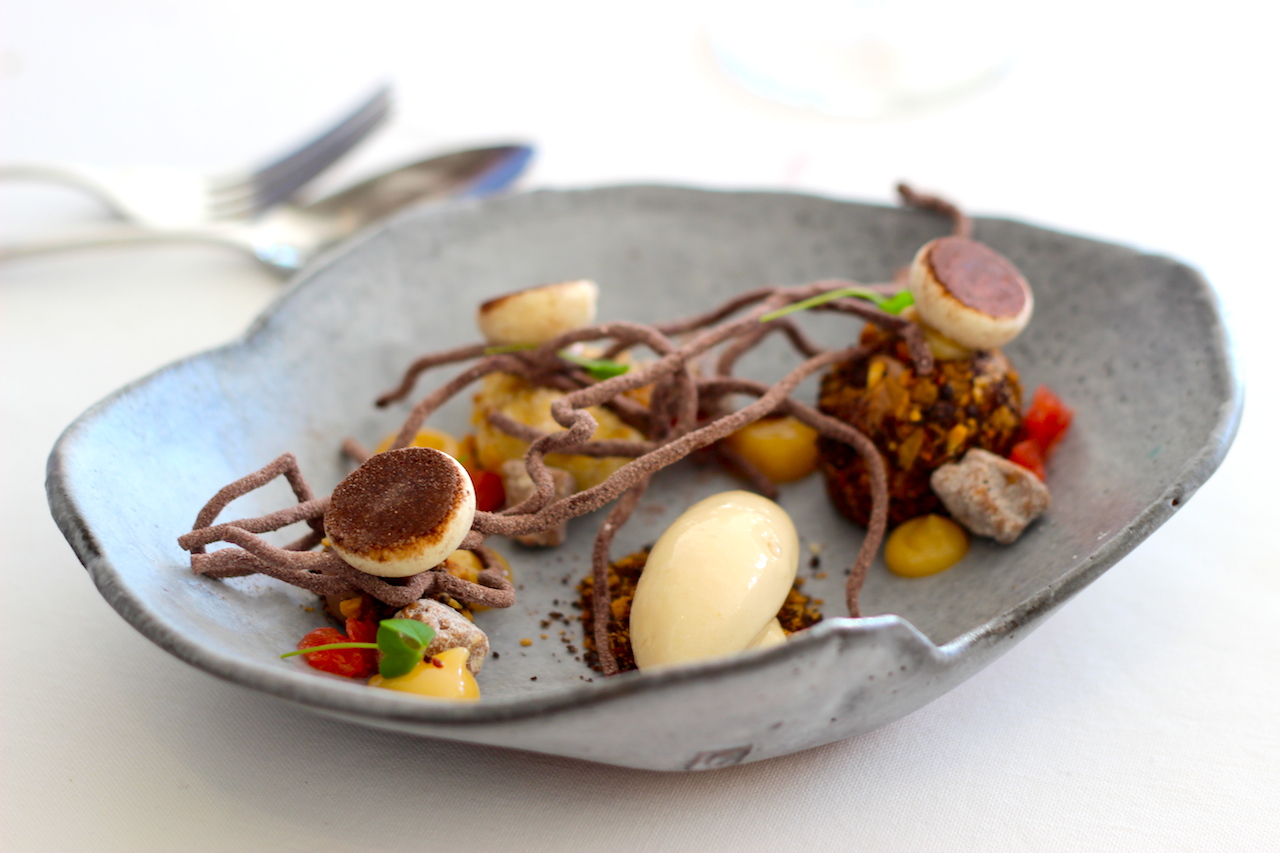 Both centered around Valrhona chocolate, our desserts were flawless. Perfectly balanced in both flavour and texture, Luke called it the best dessert he’d ever had – and I’d have to agree. We were a little spoilt and given both the Vin de Constance and Blaauwklippen Zinfandel to try with the dessert – with the verdict being that the Zinfandel worked better with the chocolate elements, while the Vin de Constance highlighted the fruit aspects more. 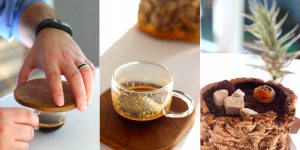 Expecting petit fours to be served on a plate, along with the bill, we were surprised to see that it manifested as another entire pairing course, with Yigracheffe coffee. Arriving covered to the table, we lifted the lids on the espresso to first experience the aroma, before sipping. We then added a cube of ice, to see the effects of rapid cooling on the brew, before adding a splash of tonic water – all accompanied by petit fours that complemented the various flavour profiles found in the coffee. This just highlighted the incredible attention to detail from the La Colombe team: nothing is an afterthought.

Almost five hours later, we weren’t ready to leave. We spent a few minutes absorbing the surroundings, the fading winter sunshine and the views, while the team around us started prepping for dinner service. We left, grateful and in awe.

Note: We enjoyed our meal as guests of La Colombe. All views and images are my own.